Starting with a parade (down an opera-house aisle) and ending nearly three hours later with a jam session, Red Hot + New Orleans brought a generous Crescent City spirit to the Brooklyn Academy of Music on Friday night to kick off a two-night stand.

Trombone Shorty, who also plays trumpet, was curator of the show, the latest of the Red Hot Organization’s AIDS benefit concerts, which donated some proceeds to the New Orleans NO/AIDS Task Force. Born Troy Andrews in New Orleans, Trombone Shorty is ubiquitous in his hometown as a bandleader and a sideman; his 2010 album, “Backatown” (Verve Forecast), is nominated for a Grammy Award. 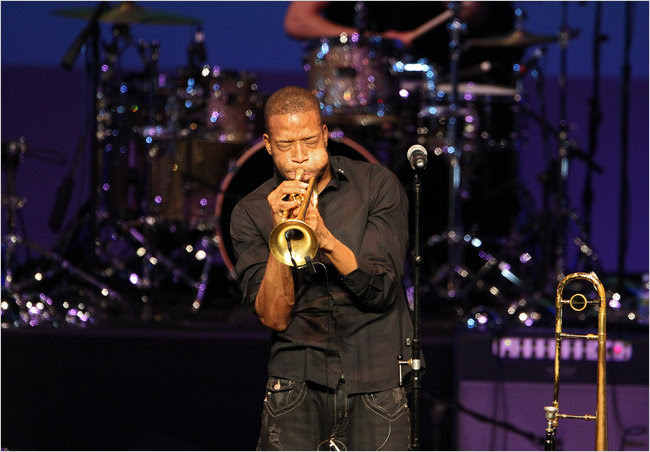 He assembled his city’s longtime stars, including Irma Thomas and Dr. John, along with local stalwarts like the trumpeter Kermit Ruffins; the keyboardist Ivan Neville; the hip-hop producer Mannie Fresh; the soul singer Marc Broussard; and members of two pre-eminent brass bands, Rebirth and the Dirty Dozen. Trombone Shorty sat in with just about everyone, playing R&B, funk, jazz and the New Orleans hip-hop variant called bounce. He also led his own band (and the concert’s house band), Orleans Avenue, which put the heft and dynamics of rock behind his own riffing, growling trombone.

Five years after Hurricane Katrina, the musical culture of New Orleans has persevered, still cherishing its long memory, its amiably shared local lore, its rhythmic genius and songs that are tough-minded even as they grin. Perhaps inevitably, the city’s culture is growing less insular. Many of the concert’s performers have had televised moments lately — or, like Trombone Shorty and Mr. Ruffins, repeated exposure — on the HBO series “Treme.” Mr. Ruffins sang the “Treme” theme during the concert’s final jam on “When the Saints Go Marching In,” which also segued into a Mardi Gras Indians song, “Let’s Go Get ’Em.”

New Orleans music also maintains its jazz-funeral determination to celebrate rather than mourn. Partners-N-Crime, a rap duo that had local bounce hits in the 1990s, enlisted Trombone Shorty and Rebirth members for a second-line parade sound in “Foot Work”; it included the lines “Katrina’s gone, can’t cry no more/ All the money’s gone, but the levees ain’t broke no more.”

Giant Mardi Gras beads hung over the stage and dangled from the box seats; a video backdrop showed images of the city and its people. That didn’t turn the opera house into a carnival, but the music got people up and dancing.

Dr. John and Ms. Thomas each did minisets of hits. Ms. Thomas seesawed between sultriness and ache in “It’s Raining” and “Ruler of My Heart.” Dr. John cackled through “Such a Night” with a splashy barrelhouse piano coda, turned to funk with “Right Place, Wrong Time” and led a spooky “Walk on Gilded Splinters,” with Mr. Neville on Hammond organ playing atmospheric chords like smoke signals.

True to a New Orleans heritage, two-fisted piano reappeared through the show. Mr. Neville riffled through the Mardi Gras mambo of Professor Longhair’s “Big Chief,” and an unannounced guest, Jonathan Batiste, splayed chords across the keyboard in “Saints.” In his own segment, Mr. Neville seized a family legacy, playing the jigsaw New Orleans funk of his uncle Art Neville’s band, the Meters. Mr. Ruffins, who sang when he wasn’t playing sweet and tart trumpet, looked toward Louis Armstrong, reviving a southern African song from the Armstrong repertory, “Skokiaan,” and sharing “What a Wonderful World” with the R&B singer Ledisi, whose scat-singing fluttered around his rasp.

The concert had some ups and downs; Mannie Fresh is an important figure in New Orleans hip-hop as a producer (notably of the Hot Boys, who included Lil Wayne and Juvenile), not a rapper. But Trombone Shorty had clearly set out to present New Orleans as a city whose glory days aren’t over. One of his band’s tunes was called “Hurricane Season,” and it was no lament. With high-note-trumpet lines and a “Hey!” shout-along, it was a signal that the city’s music would push ahead.