Bluegrass and Jazz Bands, With More in Common Than You’d Think 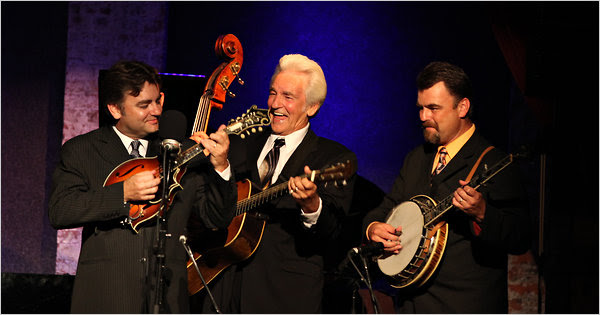 Del McCoury’s bluegrass group and the Preservation Hall Jazz Band did the proper adult thing on Wednesday night: they resolved their differences, surrounded by expensive claret.

On “American Legacies” (McCoury Music), their recent joint album, they’ve explicitly made their traditions melt together. This is an old story. Louis Armstrong did it with Jimmie Rodgers; Wynton Marsalis did it with Willie Nelson. The pairing is not a stretch, though it can seem to be. For the first half of the 20th century bands from putatively different traditions implicitly understood their common origins and points of crossover. And their repertories overlapped. Type in the song title “Corrine, Corrina” on YouTube and you’ll get Red Nichols’s jazz version, Bo Carter’s string-band blues version, and various shades of country into rock ’n’ roll from the Collins Kids, Ray Peterson, Brooks & Dunn, Big Joe Turner, and Jerry Lee Lewis.

Or you could do the same with “Milenberg Joys,” which the combined bands played near the end of their set at City Winery on Wednesday. It’s a song that Mr. McCoury — raised in the Black Mountain region of North Carolina — knew because he used to play it in Bill Monroe’s band, and the jazz group knew because Jelly Roll Morton wrote it. (The dynastic Preservation Hall band, from New Orleans, was founded in 1961 by Allan and Sandra Jaffe, parents of its current tuba player and director, Ben Jaffe; it has no original members, but the current lineup is full of familial and professional ties to the group’s past.) In that song, and in a few other places, the musicians did right by the audience: they made music subtly pan across the stage, from one band to another, so you could hear the difference in rhythmic temperament, whether in grooves or in solos.

At full strength 12 musicians stood onstage, jazz guys to the left, bluegrass to the right. The Preservation Hall band used funk and parade beats and slid into the beginning of each bar, making the “one” indistinct; by contrast, Mr. McCoury’s group bit down hard on it.

Although Mr. McCoury filled half the set with his high, clean, no-nonsense voice, there was a lot more Preservation Hall in the mix; trumpet, trombone, saxophone and tuba walked all over guitar, banjo, mandolin and string bass. (The singing styles of the Preservation Hall musicians — the trumpeter Mark Braud and the saxophonist Clint Maedgen — take up more space than Mr. McCoury, through various shades of showiness.) And the Preservation Hall band’s strong drummer, Joe Lastie, stamped an irrefutable, seductive groove deep into each song.

There were lessons and discoveries in all of that, but you wouldn’t want to overthink it; the music was too amiable and easy to like.

NY Times: At 100, [Lionel Ferbos is] Still Keeping Time as the Leader of the Band 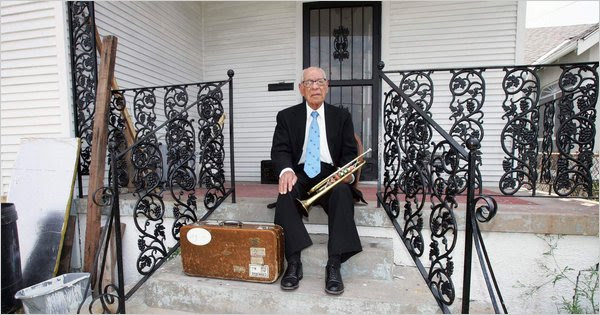 NEW ORLEANS — At midnight last Saturday, friends and well-wishers sang “Happy Birthday” to the trumpet player who led the band that night at the Palm Court Jazz Cafe. When they finished, the trumpet player turned to a few young women sitting behind him.

“Have you ever kissed a hundred-year-old man?” he asked.

The next night, jazz royalty from around the city turned out for Lionel Ferbos’s birthday party, amazed that one of their colleagues could have made it a full century. The wide Ferbos brood of tan-skinned Creoles with thin faces, pointy noses and impossible grace dominated the room, but men in seersucker suits with white straw hats and other appropriate characters filled it out. It being New Orleans, there was also a sparkly gold top hat, a red feathered sash and copious fleurs-de-lis.

Mr. Ferbos himself, with a brown suit, thick plastic glasses, deep jowls and bushy eyebrows, held court in the middle of the room, collecting birthday cards and hundred-dollar bills to pin to his chest in the New Orleans birthday tradition.

After a little while, he took the stage the way he has done every Saturday night for two decades, crooning old standards in a smooth, muddy voice. The bands are smaller than they were in the 1930s, he says, but most everything else is the same.

“It’s the same music,” he said. “We’re playing the same numbers we were playing 80 years ago.”

In a city obsessed with keeping its particular past breathing into the present, Mr. Ferbos stands as a rare example of the long journey that early jazz has taken to come to 2011 intact. He and his songs have stayed the same not just through Hurricane Katrina, but through Hurricane Betsy and the flooding in 1995 as well. They saw Vietnam, World War II, the Great Depression (he is the last surviving member of the New Orleans Works Progress Administration jazz band) and the invention of rock and roll. His face shows some of the wear of eight decades of playing. His music does not.

After the break, some local celebrities in attendance took the stage and modernized the music by a couple of decades. James Andrews, “The Satchmo of the Ghetto,” worked the crowd as audience members pulled out parasols and napkins and started parading. Irvin Mayfield, a bandleader and club owner, joined him in a slim-cut black suit and a white shirt with no tie.

Mr. Ferbos stayed in the corner, his knees bouncing in time with the music, his face occasionally appearing behind the outsize personalities dancing in front of him.

Mr. Ferbos was never a star. Until his considerable talent for longevity eclipsed his musical prowess, he was always an ensemble player. He played dance halls when his music was pop, and sit-down restaurants like the Palm Court later on. Unlike nearly every other musician in the city, he still reads his melodies off sheet music. He started playing before Louis Armstrong made improvising popular.

He was a worker, and still is, practicing every day to stay sharp. At his party, much younger men were yawning while he was still receiving a near-endless stream of birthday wishes.

A man went up to him and said, “Hope to make it next year!”

“Me too,” Mr. Ferbos replied, and laughed.