Being original at this stage in music is a tough, tough challenge. So many moves are well rehearsed and widely known, and it’s good enough for most to merely replicate well what others have done before. However, there are still artists that innovate even as they move amongst the familiar elements of a genre. Their ears and skilled hands navigate a new way forward even as the old comfortable scenery flies past. Perhaps the greatest single tribute Dumpstaphunk pays to their New Orleans funk heritage is how they’ve made this music their own, echoing the vibe AND creativity of forefathers like Louis Armstrong and Dr. John in a quest for good footin’ music.

“We know what this music is. No one can ever do what they did again, but we can take what we’ve gotten from that and go on with it and take it somewhere else,” says Ivan Neville, Dumpsta’s keyboardist, singer, occasional guitarist and general lightning rod – the man just generates energy and raw charisma each time he steps up. “We’re after it ALL THE TIME. And there’s a tension in that because we want to push ourselves. We know that a lot of groups have tried to do similar stuff to The Meters. We know that’s been done, and nobody’s gonna do that the way they did it. We are capable of doing that stuff but we try to take it to the next level. We honor tradition but, at the same time, we’re trying to push it forward. And we’ve got five voices that are all very opinionated, and that creates some tension but good tension at times. We’re a real band, a democracy, and that’s hard, but that makes the music that much more powerful because we take that little edge into the music.”

READ THE REST OF THE ARTICLE HERE.

Win a Trip to Superfly During Jazzfest in New Orleans

Win a Trip to Jazzfest!

Win a Trip to Superfly During Jazzfest courtesy of StubHub!

Pack your bags, pick your most deserving friend, and get ready to live out your Superfly fantasy in true VIP style with a trip to Superfly During Jazzfest in the Big Easy! See what it means to be VIP, and enter for your chance to win! Stubhub

Enter below to win a trip to Superfly During Jazzfest in New Orleans, May 5 – 7, 2011, courtesy of StubHub!

This month, five new performers will be inducted into the Rock and Roll Hall of Fame. It's an eclectic group of selections, ranging from pop diva Darlene Love to shock-rocker Alice Cooper. But in spite of their differences, each of these singers adopted a special identity or image to stand out from the rest of the pack. Morning Edition has been looking behind the personas of this year's inductees.

The recording studio was crammed with musicians — some of the best players in Los Angeles. They had all gathered to provide a wall of sound behind Sonny & Cher.

Behind the tall woman and the little man were multiple guitarists, horns and keyboard players. Among that last group was a 26-year-old pianist from New Orleans named Mac Rebennack, who was not too happy with the assignment.

Rebennack knew funky. He had come from one of the most vibrant rhythm-and-blues scenes in the country, and there, he'd studied the styles of local legends like Professor Longhair.

But he had been busted for drugs one too many times, and the authorities had refused to let him return home after rehab. So he went to L.A., where, in the mid-'60s, there was plenty of mind-numbing session work to be had.

Rebennack started thinking of New Orleans and a story he'd heard about a 19th century medicine man, who was revered by the poor and feared by the well-to-do. His name was said to be John Montaigne or, more commonly, Dr. John.

In 1969, Rebennack released a thematic album called Gris Gris based on the Dr. John character. The record was a mixture of rhythm and blues, jazz and voodoo chants in a Creole dialect. The album was recorded quickly by a group of expatriate New Orleans musicians during leftover studio time between Sonny & Cher sessions. For Rebennack, the hardest part was stepping out front to do the lead vocals.

"See, I don't know nothing about singing. I never wanted to be a frontman," Rebennack says. "Frontmen had big egos and was always crazy and aggravating. I just never thought that was a good idea."

No one else wanted to do it, either, so Rebennack, reluctantly, became Dr. John. When he started touring, friends from the New Orleans Mardi Gras Indians provided him with elaborate costumes, festooned with feathers and intricate beadwork. Rebennack says his goal was to preserve and promote a cultural legacy that was dying off, but the mysterious music of Dr. John connected with psychedelic rockers.

"We got some gigs playing at a love-in or a be-in or some kind of 'in,' " Rebennack says.

Since then, Dr. John's wardrobe has been scaled back to a snake-headed walking stick and some voodoo beads around his neck, and the music is straight-up funky New Orleans. But he's kept the name he took from that ancient medicine man.

"Doc has been my name all my life, and John is my middle name. I'm proud of all my names — Malcolm John Michael Creaux Rebennack," he says. "I'm proud of them names."

And has the formerly reluctant lead vocalist settled into his role as a frontman? "Yes," he says. "That's the tricknology of life."

One of the prodigiously gifted musicians of our time, New Orleans native Henry Butler has a way of infusing his native city's soul and pulse into whatever he's playing--and when it comes to what he's playing, it's best you know some geography.. - David McGee

It’s one of the sad facts of life in the world of New Orleans music. It seems nearly every year someone significant in our unique musical culture dies during the Carnival season.

Herman Ernest III was a fixture behind the drums with Dr. John’s various ensembles for decades. Along with bassist David Barard, he provided the foundation for the funk. He passed yesterday, March 6, 2011

Besides his unparalleled skills as a percussionist, Ernest also had a keen wit and was quick with a laugh. Some of my favorite memories of him on the bandstand reflect the deep rapport he had with the Good Doctor. He would often introduce the other members of the band with his signature phrase, “That’s so unnecessary.” Funeral arrangements are pending. 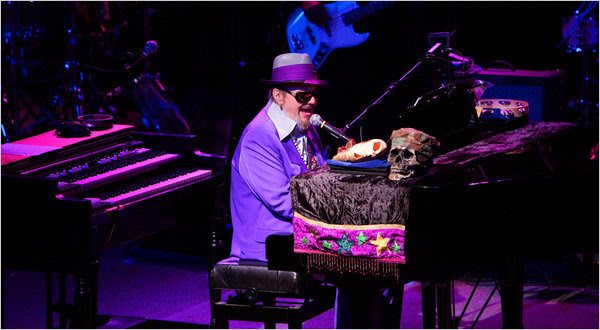 Dr. John is scheduled to perform at Le Poisson Rouge on Saturday.

Dr. John and the Lower 911 will supply the music to get the party started at Le Poisson Rouge on Saturday at its fifth annual Nolafunk Mardi Gras Ball, the first of two carnival-theme events there this week.

Sister Sparrow & the Dirty Birds, a New Orleans-inspired brass band fronted by the big-voiced Arleigh Kincheloe, will kick off the night at 8:30; Dr. John goes on at 10, and the Soul Rebels Brass Band follows at midnight. DJ Cochon De Lait will spin between sets.

Then on Tuesday, Mardi Gras day, the comedian and host Murray Hill leads a veritable second line of bands through Le Poisson Rouge for the Two Boots Mardi Gras Ball, a benefit for the Lower East Side Girls Club. Reverend Billy and His Gospel Choir; the Raya Brass Band; and the Loose Marbles, who offer swinging jazz, will be among the music makers accompanying an auction and a raffle. Prizes will go to the best costumes for an individual or krewe. (Nolafunk Ball, 7:30 p.m.; $40 in advance, $45 at the door. Two Boots Ball, 7 p.m.; $25; 158 Bleecker Street, near Thompson Street, Greenwich Village; 212-505-3474 begin_of_the_skype_highlighting 212-505-3474 end_of_the_skype_highlighting, lepoissonrouge.com.)

Other events on Tuesday:

Mudville9 in TriBeCa is offering free tastings of Abita beers, brewed in Abita Springs, La., with flavors like the thick and dark Turbo Dog, the spicy Jockamo IPA and the potent Mardi Gras Bock. (6 to 8 p.m.; 126 Chambers Street, between Church Street and Broadway; mudville9.com.)

And last, but certainly not least, in the realm of southern decadence, the Ace of Clubs and the Acme Bar and Grill have joined forces for a Mardi Gras super-party, with two floors of “food, beads and booze” and a show by the band Sidewalk Zydeco. (6 p.m.; entry is free, but food and drinks are not; 9 Great Jones Street, between Broadway and Lafayette Street, East Village; 212-677-6963 begin_of_the_skype_highlighting 212-677-6963 end_of_the_skype_highlighting, aceofclubsnyc.com.)

Bourbon Street Bar and Grill will be taking advantage of its namesake’s biggest night with its usual Tuesday specials of $5 hurricanes and free endless jambalaya bowls. But the restaurant actually puts the “fat” in Fat Tuesday on Wednesday — Cajun Foodie Day — with $5 tastings of Cajun-inspired specialties like fried alligator and boudin sausage po-boys. And as with any good French Quarter bar, the happy hour is actually eight happy hours, from noon to 8 p.m. (346 West 46th Street, Clinton; (212) 245-2030 begin_of_the_skype_highlighting (212) 245-2030 end_of_the_skype_highlighting, bourbonny.com.)