In Pictures: Scenes from New Orleans

In just the past few months, a list of improvisational rock legends have played Brooklyn Bowl. Galactic was the latest band in this historic run. I last saw them two years ago when they were touring to support From the Corner to the Block, where they performed with different alternative rappers who contributed to their album, including Gift of Gab, Chali 2na, and Mr. Lif. Two years later, From the Corner to the Block is still their latest album, but they have stopped traveling with different rappers and returned to playing mainly as an instrumental funk band. For this tour Galactic added Corey Henry of The Dirty Dozen Brass Band, a Louisiana Trombonist who also drops the occasional rap. Opening for this show were the mash-up masters The Hood Internet.

Galactic is one of the most popular bands in the contemporary NOLA funk movement. This has been perpetuated in part by their influential management team, Superfly Productions, the force behind the Bonnaroo Music Festival. Galactic has also been touring incessantly for the past 15 years and their music speaks for itself. The release of their last album has moved the band in a direction with more of an urban appeal, but this show saw the band returning to their NOLA roots.

One great thing about instrumental funk, whether it be an organ trio like Soulive or a full ensemble, are re-worked covers of popular tunes. The first six notes of Jimi Hendrix's "Manic Depression" were instantly recognizable before they went into a loud trombone solo. During a heated jam, saxophonist Ben Ellman took out his electric harmonica, which runs a cable into an effects pedal. The distortion he used had it sounding like an electric guitar at times. The two chord jam segued into one chord, leaving a lot of room for melody and improvisation (think the Allmans' "Mountain Jam").

Corey Henry fits in so well with Galactic it's easy to forget that he's not an official member. Being able to adapt is one of Galactic's unique qualities. They added vocalist Theryl DeClouet (aka House Man) early in their career, returned to an all-instrumental group shortly after, and then went on a tour with various rappers. During the title track off From the Corner to the Block, Henry's dirty New Orleans slang worked the crowd. After gathering the audience in front of him by chanting, "Where my party people at!?!" Henry took a stage dive into the crowd and made his way across the sea of hands. After dropping to the ground, he sprang up and took his swagger back to the stage. He had another try at it later; this time making his way back and forth, safely guided by the trusting hands of the live music community. During "Chris Cross," Henry and Ellman took dual lead solos, passing the music between them as if they were talking to each other. At one point, Henry jumped atop the overhang of a doorway and started playing as the spotlight followed him. He proceeded to strut around the room, working the crowd into a frenzy.

Other highlights from the night include New Orleans native Stanton Moore's solo on "Blackbird Special," a brass band favorite. Bassist Robert Mercurio also took a solo during "Crazyhorse Mongoose" with heavy distortion making the bass sound crunchy, like a metal guitar. Mercurio had his trusty '60s vintage Fender Precision Bass that he plays at every gig. The bass is almost identical to the Motown legend James Jamerson's Funk Machine, and Mercurio pays homage to his soulful forefathers with his timeless style. At one point, a drunken kid dressed in the height of Williamsburg fashion, jumped onstage and started trying to talk to the band, and it took a while before he was finally escorted off. Although he did his best to ruin the vibe, nothing could stop Galactic as they continued to grind away, barely phased.

Williamsburg is both extremely intriguing and repulsive. The streets have some of the most beautiful graffiti and art in all of New York, and it is a lively, safe community. Yet signs of excess and aggressive gentrification are everywhere. The vibe that Brooklyn Bowl brings to the neighborhood is a new and different energy that's humble, exciting, and nostalgic for the golden ages of music while working to create a new one.

When PBS plays Tipitina's French Quarter Friday night, it will be its last show for the funk trio with bassist George Porter, Jr. (pictured). "I put in my time," he says. "I gave my 100 percent for four years." The band also includes drummer Russell Batiste and guitarist Brian Stoltz, and earlier this year, they released the live Moodoo earlier this year, along with a series of live downloads. "I wasn't seeing the progress I wanted," Porter says. 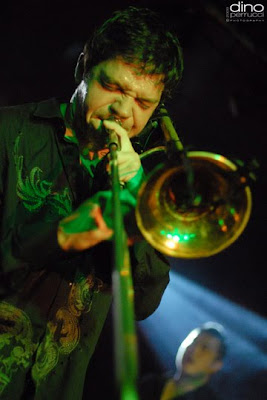 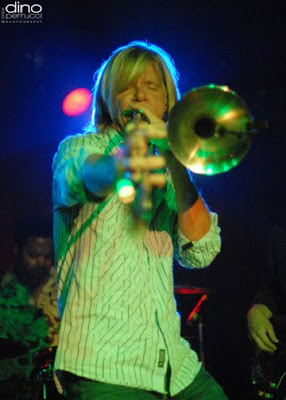 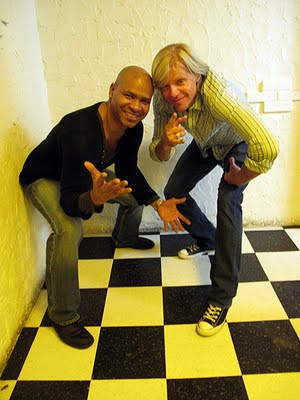 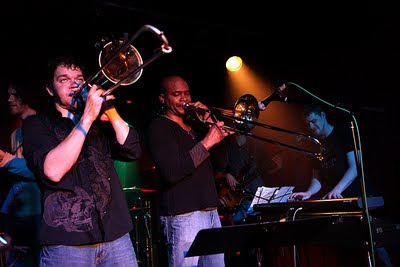 Kermit Ruffins at Vaughan's: Fish in an Aquarium

My father called me Thursday morning. He was in the Tulsa, Oklahoma airport and bumped into a crew of women headed to New Orleans. They needed tips for live music. I advised them how I would anyone that’s fortunate enough to be here on a Thursday night: They unequivocally needed to trek to Vaughan’s for “the Kermit Ruffins experience”.

I’m so attached to this weekly offering of high notes, endless boogies, and the potential red beans or BBQ, that my wife and I bought a home just seven cottages away. Though we certainly miss being within walking distance of the iconic Maple Leaf.

Some patrons of the arts show their support by mailing in a check. Others might buy a pricey plate at a gala dinner. Bill Bender, a music lover who splits his time between New Orleans and Chicago, likes to be a little more hands-on. The longtime fan and friend of The Radiators is putting on a show -- exactly the show he wants to hear -- and everyone is invited.


"Everyone jumped for joy to the speed-core melange of klezmer tornadoes, Balkan dances, Celtic reels and bayou-squeezbox war" -Rolling Stone 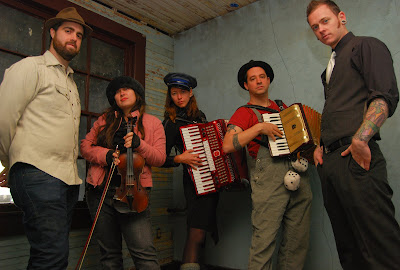 Innovators, renegades, survivors - within a few years, the Zydepunks have grown from underground heroes into one of New Orleans' most talked about bands. Yiddish riddles, Irish ballads, Cajun punk, and original songs in Spanish and German are a small demonstration of why they astound new audiences. Wild folk dances fronted by accordion and fiddle and backed by relentless drums and bass are a testament to the high-energy folk-punk dance craze that is a Zydepunks show.

New Orleans, Music, Vampires and Me

I come from a family of musicians. My father is a Julliard trained music professor and pianist, and my grandfather was a flautist for the Pittsburgh Symphony. In his spare time, my grandfather repaired instruments for all the Pittsburgh area high school bands. I have a sepia-toned picture on my desk at home that captures him working on kids' instruments. So when I heard about The Tipitina's Foundation in New Orleans -- and especially the Instruments A Comin' Program -- I had an immediate connection. I know firsthand how music can be the connective tissue in a community, and how here in New Orleans, it is a positive force for young people at an impressionable (and risky) point in their lives. There are shining examples of exactly that on stages and street corners all over the city. If a student has the desire to play, The Tipitinas Foundation makes sure that student has the opportunity to play. It's not about making musicians; so much as it is making people. And that's a cause worth supporting. 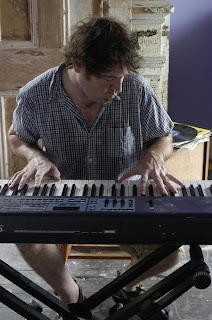 Take the enthusiasm and playfulness of early New Orleans rhythm and blues, add to that the bright yet cynical wit of Ben Folds Five, the rock meets jazz sensibilities of early Steely Dan, and the mocking humor that runs through the works of Professor Longhair, Allen Toussaint, Earl King and Ernie K Doe, and you begin to describe the music of Davis Rogan.

Davis is a fifth generation New Orleanian who was raised in Carrollton and now resides in the Treme. He took piano lessons from Jon Cleary, Ed Frank, and Tom McDermott, began his broadcast career on WTUL at the age of 10, and was a DJ at WWOZ for 13 years.

He first came to prominence in the New Orleans music scene with his eight piece funk group ALL THAT, for which he was lead singer, band leader, principal songwriter, arranger and producer. With three albums to their credit, including one on Rounder Records co-produced with Scott Billington. The band toured extensively in North America and Canada, performed at the New Orleans Jazz and Heritage Festival multiple times and sold over 10,000 records in the US and Japan.

New Orleans music scene is legendary known as the birthplace of jazz, pioneers such as Louis Armstrong and Fats Domino hail from the Louisianan state and music remains the cultural centerpiece of this American city.

Two New Orleans natives are continuing this tradition and are about to take the music industry by storm.

Darrell Flowers and Will Metcalf are music producers and songwriters for their company MF’Ntertaintemnemt specialising in many different genres including Pop, Rock, Jazz, Hip Hop and RNB.

The pair have been making music for more than 10 years and with former Boys II men star Michael McCary on hand to offer advice they are looking forward to making their mark.

It’s a timeworn truism among observers of the New Orleans music scene that musicians here often have to leave the city to earn a living wage.

That dictum rang true for New Orleans trumpeter Troy Sawyer long before Hurricane Katrina, so much so that Sawyer, now 29, was considering heading for New York when the 2005 storm struck.

“I felt as though I needed to get away to broaden my perspective and to reach more people — and get paid more,” he said. “In New Orleans, you don’t really get paid that much. There’s so much talent down here that people just give it away for free.” 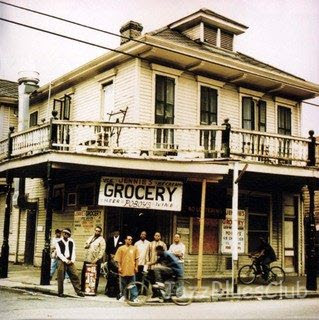 Having dropped the "Brass Band" part of their moniker for their disappointing Ears to the Wall in 1996, the Dirty Dozen return to their former, fuller-named persona for Buck Jump. And it's a relief. The band is in full bloom from the opening, funk-fueled track, even if the old snare-bass drum marching format gives way to a more standard drum kit for much of the session. With production from John Medeski (he of the vaunted groove outfit Medeski Martin & Wood), the DDBB steps up to blow on a wild array of songs, from "Run Joe," long an item for Louis Jordan, to a feverish read of Marvin Gaye's "Inner City Blues." There's a great balance struck throughout the CD between the old school march-rhythm rave-ups and their more complex compositions that began coming to the fore on the excellent Open Up! Medeski has the whole party right in your face, too, from virtually the first seconds, when the horns blow brightly and never back off.

New Orleans is known as the birthplace of jazz, an honor the city prides itself in. From dim lit jazz venues lining the city streets to its annual Jazz and Heritage Festival, New Orleans is a excellent American music city. Jazz is not the only music being created in the Big simple though. A lot of music venues and Clubs offer an eclectic mix of blues, gospel, hip hop, rock and more

The Last Great US Music Fest of 2009 – New Orleans’ Voodoo Experience
No comments: