Words & Images by: Jeffrey Dupuis
Tipitina's 31st Anniversary
Midnite Disturbers, 504 Brass Band, Johnny Sketch, Good Enough for Good Times
Ivan Neville & Friends, Billy Iuso and Restless Natives, Groovesect, PBS
01.14 - 01.17 :: New Orleans, LA
Founded in 1977 as a neighborhood juke joint, Tipitina's recently celebrated its 31st anniversary. Founded by fourteen young music fans (The Fabulous Fo'teen) as a place for Professor Longhair to play in his later years, Tipitina's has grown to be the crowing jewel of the Tipitina's Foundation, a non-profit organization dedicated to supporting and nurturing the musical heritage of New Orleans and Louisiana. A veritable who's who of American music has graced the stage, which continues to support up-and-coming musicians and well-established acts alike.

Ed Ingraffia, who booked the anniversary series and acts as the Foundation's technology advisor explains, "What we wanted to do with our anniversary celebration this year was to present a comprehensive lineup of musical styles that represent the legacy and future of Tipitina's, as well as to showcase the musicians who contribute to the continuing mission of the Tipitina's Foundation in so many ways. Musicians such as Stanton Moore and Troy "Trombone Shorty" Andrews - both of whom have learned from their predecessors and now teach those of the next generation through programs at Tipitina's - are prime examples how the music traditions of New Orleans are passed down and cultivated into the next chapter of our city's cultural history. Through programs such as the Tipitina's Internship Program, Sunday Music Workshop and Music Office Co-operatives, our Foundation strives to foster these traditions, and be instrumental in the development and promotion of Louisiana music within both our local community and around the world."

George Porter Jr.
"I've been playing this room since it became Tipitina's. The Meters and Professor Longhair were the first bands to play here. It's nice to be here, and it's always been good to me."

Ivan Neville, Dumpstaphunk, Neville Brothers
"Tip's to me is home. It's the training ground where I learned, listening and playing. If there was ever a music venue that was home, this is it, period."

Stanton Moore
"To me, Tipitina's is the temple of New Orleans music. It's where all the great people before us, and hopefully after us, have played. Growing up I always wanted to be good enough to be playing here. I feel honored to play here - it always feels like it's important, and important to play your best here."

Walter 'Wolfman' Washington
"Tipitina's has been a landmark after the Dew Drop Inn. When Fess was playing here, a lot of cats would get off of work and come here for the late night hours. Everybody came through here and jammed. It's been a home base for all us cats who have been around a while."

Kevin O'Day, Midnite Disturbers
"Tipitina's means the whole history of New Orleans music put into one place. The first time I walked on the stage, all the history and all the music that had been played on the stage hit me. It really blew my mind. From that point on, every time I've played here has been the bomb!"

Bob Compton, photographer
"Tipitina's is the center of the musical universe. I was here late one night and my friend asked if I wanted a ride home, and I looked at him and said, 'I am home.'"

Mark Mullins, Bonerama
"Tipitina's means you better put your best stuff on. Ever since I was a kid, I thought it would be an honor to play at Tip's. Tip's is its own special, unique place. You can't explain it, you have to visit and experience it."

Skerik, madman
"Tipitina's means everything to me. It is the epicenter - the center of the entire universe."

Andre Bohren, Johnny Sketch and the Dirty Notes
"The first time I was at Tip's I was about four-months-old. One of the most exciting moments of my life was when I first played Tip's. For me, there's no other place I'd rather play in the world."

Marc Paradis, Johnny Sketch and the Dirty Notes
"Playing Tipitina's for the first time was the biggest moment in my career up to that point, because you know what kind of sweat is soaked into the stage, who has played here, what kind of amazing events have occurred here - it's a tangible thing and you can sense that some real magic has happened here. It's hallowed ground. It's the hippest place to play. You feel like you're doing well when you can play a gig at Tip's."

Joe Ashlar, Good Enough for Good Times
"Before I moved to New Orleans, I flew down and played a gig at Tip's, and that was one of my favorite shows I had ever played. I decided to move here after that and call New Orleans home now.

Simon Lott, Good Enough for Good Times
"I love playing at Tip's. It's ecstasy - it's wonderful. I love this place."

Jeff Raines, Galactic
"If I could call a club my home, this would be it."

Bust Gnutt, Johnny Sketch and the Dirty Notes
"I grew up in NOLA, and Tip's has always been the club - the venue. It's an icon, a great place to play. People come here and expect something good, expect you to deliver."

Billy Iuso, Restless Natives
"Tipitina's is always a good gig, good vibes and happy people. It's an important place in the music world. I hope it lasts a long time."

Ian Neville, Dumpstaphunk, Funky Meters
"Tipitina's has been a musical backyard. I remember coming in here since I was barely able to walk, reading stuff on the dressing room walls when I shouldn't have been reading it - enlightening stuff, you know. The list of people I've seen in here is the list that has helped me grow."

Jeff Coffin, Bela Fleck and the Flecktones, Mu'tet, Dave Matthews Band
"It's a real community of musicians. Everybody is playing and supporting everyone else. In a word, community - it's a beautiful thing."

Raymond Webber, Dumpstaphunk
"Tip's is very special to me and was one of my first gigs. It's a great institution and I hope we keep it going."

Erica Goldring, photographer
"Tipitina's is the heart of Uptown, where we grew up. It's my stomping ground. I keep coming back."

Danny Able, Groovesect
"My first real music experience in New Orleans was at Tipitina's. It was unlike anything I had experienced before. Tipitina's is what New Orleans is - the epitome of the New Orleans vibe. It's the center of the vortex - people get sucked in here." 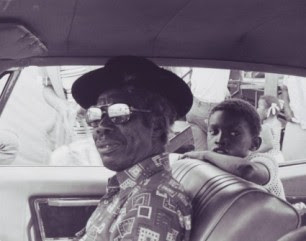 Justly worshipped a decade and a half after his death as a founding father of New Orleans R&B, Roy “Professor Longhair” Byrd was nevertheless so down-and-out at one point in his long career that he was reduced to sweeping the floors in a record shop that once could have moved his platters by the boxful. That Longhair made such a marvelous comeback testifies to the resiliency of this late legend, whose Latin-tinged rhumba-rocking piano style and croaking, yodeling vocals were as singular and spicy as the second-line beats that power his hometown’s musical heartbeat. Longhair brought an irresistible Caribbean feel to his playing, full of rolling flourishes that every Crescent City ivories man had to learn inside out (Fats Domino, Huey Smith, and Allen Toussaint all paid homage early and often). Longhair grew up on the streets of the Big Easy, tap dancing for tips on Bourbon Street with his running partners. Local 88s aces Sullivan Rock, Kid Stormy Weather, and Tuts Washington all left their marks on the youngster, but he brought his own conception to the stool. A natural-born card shark and gambler, Longhair began to take his playing seriously in 1948, earning a gig at the Caldonia Club. Owner Mike Tessitore bestowed Longhair with his professorial nickname (due to Byrd’s shaggy coiffure). Longhair debuted on wax in 1949, laying down four tracks (including the first version of his signature “Mardi Gras in New Orleans,” complete with whistled intro) for the Dallas-based Star Talent label. His band was called the Shuffling Hungarians, for reasons lost to time! Union problems forced those sides off the market, but Longhair’s next date for Mercury the same year was strictly on the up-and-up. It produced his first and only national R&B hit in 1950, the hilarious “Bald Head” (credited to Roy Byrd & His Blues Jumpers). The pianist made great records for Atlantic in 1949, Federal in 1951, Wasco in 1952, and Atlantic again in 1953 (producing the immortal “Tipitina,” a romping “In the Night,” and the lyrically impenetrable boogie “Ball the Wall”). After recuperating from a minor stroke, Longhair came back on Lee Rupe’s Ebb logo in 1957 with a storming “No Buts - No Maybes.” He revived his “Go to the Mardi Gras” for Joe Ruffino’s Ron imprint in 1959; this is the version that surfaces every year at Mardi Gras in New Orleans. Other than the ambitiously arranged “Big Chief” in 1964 for Watch Records, the ’60s held little charm for Longhair. He hit the skids, abandoning his piano playing until a booking at the fledgling 1971 Jazz & Heritage Festival put him on the comeback trail. He made a slew of albums in the last decade of his life, topped off by a terrific set for Alligator, Crawfish Fiesta. Longhair triumphantly appeared on the PBS-TV concert series Soundstage (with Dr. John, Earl King, and the Meters), co-starred in the documentary Piano Players Rarely Ever Play Together (which became a memorial tribute when Longhair died in the middle of its filming; funeral footage was included), and saw a group of his admirers buy a local watering hole in 1977 and rechristen it Tipitina’s after his famous song. He played there regularly when he wasn’t on the road; it remains a thriving operation. Longhair went to bed on January 30, 1980, and never woke up. A heart attack in the night stilled one of New Orleans’ seminal R&B stars, but his music is played in his hometown so often and so reverently you’d swear he was still around. - Bill Dahl (allmusic)