Win a VIP trip to Jazzfest

Acura is offering you a chance to win an all-expense paid trip to attend this year’s Jazz Fest, as well as special access to the Acura Stage and the Acura VIP Tent. To enter, visit: http://bit.ly/YruV3J 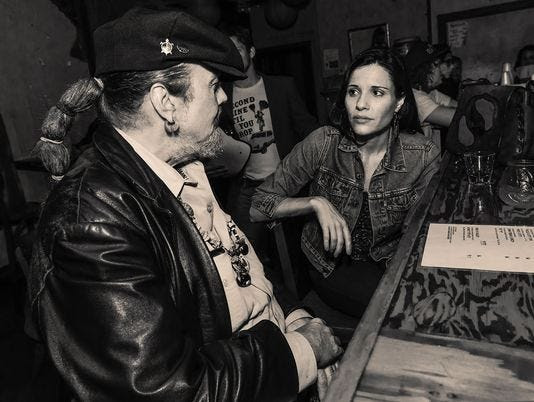 Songwriter Bobby Charles would have been 75 today.

Shannon McNally has a birthday present for the late songwriter of early rock 'n' roll hits like Fats Domino's Walking to New Orleans and Bill Haley & The Comets' See You Later, Alligator -- a sweet cover of his I Must Be in a Good Place Now, recorded with Dr. John on piano.

"It sums Bobby up pretty perfectly," says McNally. "The guy would sort of rather be fishing than doing anything else."

I Must Be in a Good Place Now will appear on the alt-country singer/songwriter's forthcoming Small Town Talk album, out April 30.

McNally previously covered Charles' Tennessee Blues on her 2005 album Geronimo. That recording led to Charles asking her to play a tribute concert at the 2007 New Orleans Jazz & Heritage Festival, where she met keyboardist Dr. John. Dr. John, aka Mac Rebennack, had played on the original version of I Must Be in a Good Place Now for Charles's 1972 debut album for Bearsville Records.

McNally floated the idea of re-recording the Bearsville album in its entirety with some of the same musicians. "To my amazement, and pleasure, they both went for it," she says.

McNally cut basic tracks for the album before Charles' death in 2010, so he was in the studio for the sessions. However, the concept of the album evolved: "There were so many great songs to choose from, and a few real gems that had never gotten released, that it turned into more of a retrospective," McNally says.
Small Town Talk still includes several songs from that 1972 album, as well as a rendition of one of Charles' better-known tunes, But I Do, originally a 1961 hit for Clarence "Frogman" Henry.

"People will recognize that song," McNally says, "people of a certain record collection or age."

We talked to Dave Malone and Reggie Scanlan just prior to the band’s sold-reunion shows on January 18 and 19, celebrating both the club’s 35th anniversary and 35 years since The Radiators first formed. After the shows captured on The Last Watusi, Malone admitted to having to “chill for a while and let the end of the Rads sink in.” Since then he has joined forces with his brother Tommy of the subdudes as the Malone Brothers Band, along with forming Raw Oyster Cult with fellow Rads Baudoin and Bua (along with John “Papa” Gros on keys and Dave Pomerleau on bass).

Reggie Scanlan hit the ground running after The Last Watusi shows: he was on stage with the newly-formed New Orleans Suspects (drummer Willie Green, guitarist/vocalist Jake Eckert, CR Gruver on keys and vocals, and hornman Jeff Watkins) two weeks after the Rads’ 2011 good-bye shows. Scanlan’s full-speed-ahead attitude was meant with a serious challenge in early 2012: diagnosed with pancreatic cancer, he underwent a 16-hour surgery followed by a month in the hospital. His fellow Suspects were waiting for him, however: two days out of the hospital, Scanlan was on stage at JazzFest – a true survivor, sitting on a stool and playing his beloved bass. Since then the band has released two albums (one studio/one live) with a third of all-new material on the way.


Both Malone and Scanlan cautioned that there were no Radiators plans beyond the January reunion shows. Scanlan, fully focused on The New Orleans Suspects, likened the “get-back-together” rumors surrounding the Rads shows as the sort of talk you’d hear when a divorced couple gets together for coffee to talk about the kids: “Everybody on the outside thinks they’re going to get remarried and it’s great – nobody knows what’s really going on except the people themselves.”
We conclude with some reflections from both.

The Stooges Brass Band got its start when members of two rival high-school marching bands in New Orleans decided to join forces. Today, the group mixes hip-hop, funk and R&B in its thrilling live performances. Hear the group recorded at Webster Hall in New York City.

Though it's the year's premier "world music" event, GlobalFEST embraces many homegrown sounds — and the 2013 roster was full of North American artists. A case in point: The Stooges Brass Band, a New Orleans brass band for the 21st century. It's got that unmistakeable sound of its hometown, but hip-hop, funk, R&B and soul are all in the group's DNA. Introducing great party bands to wider audiences has become a signature element in globalFEST's programming (just think of Red Baraat and Debo Band), and this year's entry in that category was The Stooges. "World music" or not, the group definitely got the room jumping.

The 'Baby Dolls' Of Mardi Gras: A Fun Tradition With A Serious Side LISTEN TO THE STORY HERE

Just inside a room on the second floor of the Louisiana State Museum's Presbytere, there's a large baby doll dress, big enough for a woman to wear. And one did.

The costume and the baby bottle next to it belonged to 85-year-old Miriam Batiste Reed, who was known as a baby doll and one of the first women to parade in Mardi Gras. The bottle and the dress are part of a new exhibition, They Call Me Baby Doll: A Mardi Gras Tradition.

"The baby dolls are a group of African-American men and women carnival maskers," says Kim Vaz, dean at Xavier University. "They would dress up on Mardi Gras day in short satin skirts, with bloomers, and they would have garters."

Vaz, who has written a new book about the baby dolls, says the tradition dates back to 1912, when Jim Crow was the law of the land in the South. It all started in New Orleans' red-light district, which itself was divided along racial lines. The Storyville area, where the sex industry was legal, was for white customers; black customers had to go a few blocks away where prostitution was illegal, but allowed. 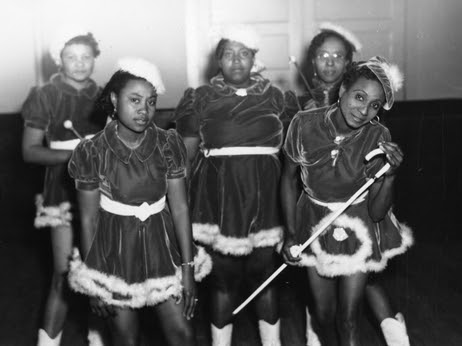 "[It was] another manifestation of how Jim Crow worked to disenfranchise black people, even in the most sordid of industries," Vaz says.


Between these two red-light districts, there was a kind of rivalry. One year the women in the black district heard that their counterparts in Storyville were going to dress up for Mardi Gras; they decided they needed to come up with some good costumes to compete.
"And they said, 'Let's just be baby dolls because that's what the men call us. They call us baby dolls, and let's be red hot,' " Vaz says.


Calling a woman "baby" had just made its way into the popular lexicon, with songs like "Pretty Baby" written by New Orleans native Tony Jackson. There was, however, something subversive about black sex workers dressing this way.
"At that time, baby dolls were very rare and very hard to get," Vaz says. "So it had all that double meaning in it because African-American women weren't considered precious and doll-like."


Just the fact that these prostitutes were masking and going out into the street at all was a big deal. Women just did not do that then. And as sex workers, these women were already taboo. Vaz says they just kept piling on by appropriating males behaviors like smoking cigars and flinging money at the men.  "If you went to touch their garter, they would hurt you," she says.


The baby dolls carried walking sticks they would use in their dances, as well as to defend themselves. It was about fun, Vaz says, but it was a kind of laughter to keep from crying.
"At that time ... residential segregation was practiced, job discrimination was practiced [and] women didn't have the right to vote," she says. "The one way that they could make a statement was through their dance and their dress and their song. It's when you've exhausted all your legal remedies that you have to use the culture to make a statement and express yourself."


They came up with their own dance step they called "walking raddy." Pretty soon, women in more "respectable" neighborhoods started masking baby doll. But desegregation in the 1950s allowed black New Orleanians to do more on Mardi Gras.
Then Interstate Highway 10 was built directly through the neighborhood where African-Americans gathered to celebrate carnival, disrupting many traditions. The baby dolls faded, until several years ago. 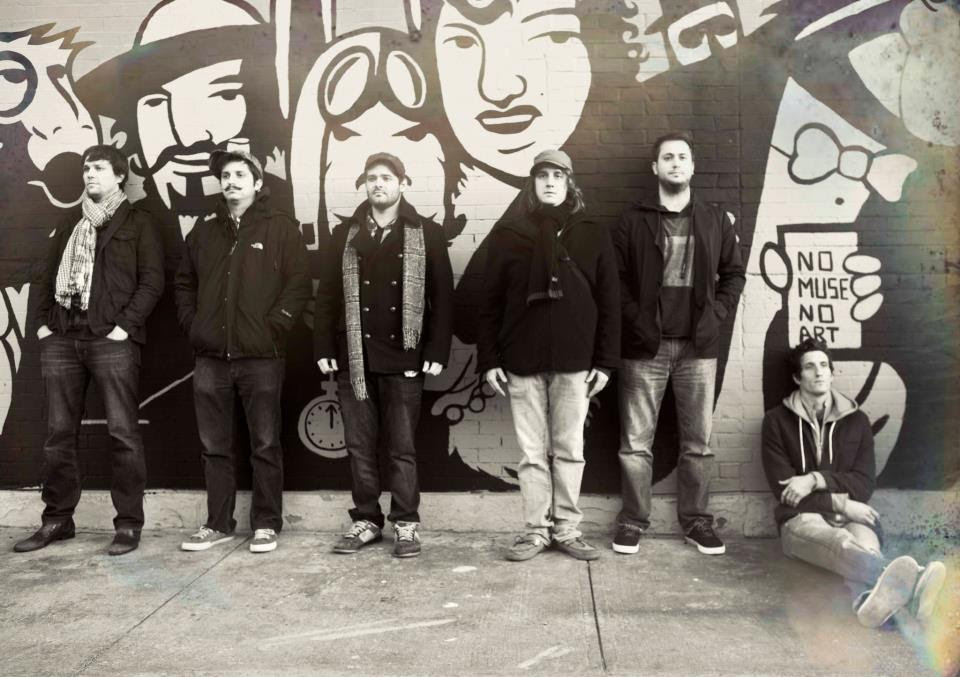 The Revivalists at Mercury Lounge: Sold-Out and Well-Deserved

The Revivalists at Mercury Lounge 1/30/13

New Orleans’ The Revivalists played to a sold-out Mercury Lounge on Wednesday night.  It was my first time seeing them, as I have heard nothing but good things from many friends and acquaintances.  After hearing an “In The Studio” session on SiriusXM_Jam-On several days ago, it became quite clear that I was not missing this show. It’s hard to pigeon-hole these guys into one genre.  They are from NOLA and definitely get funky, but there is clearly some indie-rock elements, along with lyrical content that is borderline pop.  What this adds up to is a sound that is extremely unique, yet one that could very easily find a modicum of mainstream success.

They seem to be doing fairly well for themselves already, as they had a successful 2012 while touring in support of their second album City of Sound.  Having just been announced for the Governor’s Ball lineup this June in NYC, and the fact that musicians like Warren Haynes and Mike McCready of Pearl Jam have come out and played with them on stage, gives credence to the recognition that The Revivalists have received.  On Wednesday night, it became quite clear early on that these guys have a long career ahead of them. 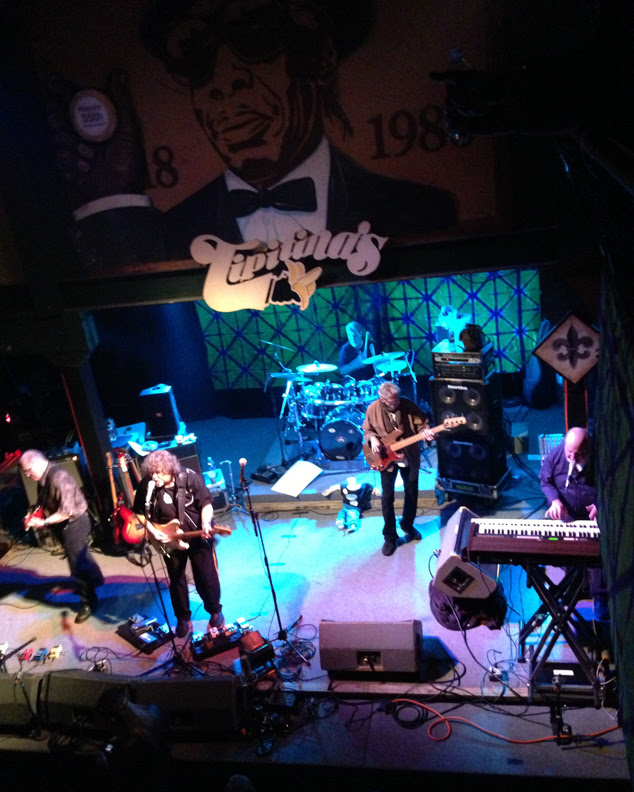 The Radiators reunited for a pair of shows at Tipitina’s on January 18 and 19 as part of the New Orleans club’s 35th anniversary celebration. The group had last performed at the club during its climactic Last Watusi event in June 2011. Here are a couple songs from the 18th, including a guest appearance by Bonerama’s Mark Mullins on trombone for “Early Bird Cafe.”

Watch: Jam in the Van feat. Stooges Brass Band's "Wind It Up"

Email ThisBlogThis!Share to TwitterShare to FacebookShare to Pinterest
Labels: bonnaroo, jam in the van, stooges brass band, wind it up

Guitarist, composer, founding member of the internationally known group The Meters!
In their 41-year history, The Meters have grooved their way around the globe. They have toured with such talents as The Rolling Stones, and have been the rhythm for such diverse artists as Dr. John, Paul McCartney, Robert Palmer and Patti Labelle. Considered by many to be the founding fathers of funk, The Meters created a unique sound that lasted through the sixties and seventies and was reborn in the late eighties. Their trademark sound blends funk, blues, and dance grooves with a New Orleans vibe.
http://www.nocentelli.com/

Fred Wesley (JB Horns. / P Funk)
Trombonist, composer, arranger, bandleader and author known worldwide as one of the architects of funk music. Fred's work with Godfather of Soul James Brown in the 1970s established him as the world's funkiest trombone player. Today he fronts his own jazz-funk band, the New JBs, passes his expertise along to students and younger musicians around the world, and lends his fire to assorted artists across a broad musical spectrum.
http://www.funkyfredwesley.com/

Stanton Moore (Galactic)
Stanton Moore is a rock drummer raised in Metairie, Louisiana. Most widely known as a founding member of Galactic, Moore has also pursued a solo recording career (beginning with his 1998 debut All Kooked Out!) and recorded with bands as diverse as jazz-funk keyboardist Robert Walter and heavy metal act Corrosion of Conformity. He also travels internationally to teach New Orleans drumming, writes a regular column for drumming magazines, and releases instructional books and videos.
http://www.stantonmoore.com/