The Preservation Hall Jazz Band derives its name from Preservation Hall, the venerable music venue located in the heart of New Orleansâ€™ French Quarter, founded in 1961 by Allan and Sandra Jaffe. The band has traveled worldwide spreading their mission to nurture and perpetuate the art form of New Orleans Jazz. Whether performing at Carnegie Hall or Lincoln Center, for British Royalty or the King of Thailand, this music embodies a joyful, timeless spirit. Under the auspices of current director, Ben Jaffe, the son of founders Allan and Sandra, Preservation Hall continues with a deep reverence and consciousness of its greatest attributes in the modern day as a venue, band, and record label.


The building that houses Preservation Hall has housed many businesses over the years including a tavern during the war of 1812, a photo studio and an art gallery. It was during the years of the art gallery that then owner, Larry Borenstein, began holding informal jam sessions for his close friends. Out of these sessions grew the concept of Preservation Hall. The intimate venue, whose weathered exterior has been untouched over its history, is a living embodiment of its original vision. To this day, Preservation Hall has no drinks, air conditioning, or other typical accoutrements strictly welcoming people of all ages interested in having one of the last pure music experiences left on the earth.


The PHJB began touring in 1963 and for many years there were several bands successfully touring under the name Preservation Hall. Many of the band's charter members performed with the pioneers who invented jazz in the early twentieth century including Buddy Bolden, Jelly Roll Morton, Louis Armstrong, and Bunk Johnson. Band leaders over the band's history include the brothers Willie and Percy Humphrey, husband and wife Billie and De De Pierce, famed pianist Sweet Emma Barrett, and in the modern day Wendall and John Brunious. These founding artists and dozens of others passed on the lessons of their music to a younger generation who now follow in their footsteps like the current lineup.
No comments:

Antoinette K-Doe's Mardi Gras morning death from a heart attack cast the future of the Mother-in-Law Lounge in doubt. Since 2001, Antoinette had presided over the North Claiborne Avenue nightclub as a decidedly offbeat community center and shrine to her late husband, rhythm & blues singer Ernie K-Doe.

But Antoinette's daughter, Betty Fox, has decided to move to New Orleans from Tennessee and run the Lounge.

"I can't see letting it go," Fox said. "She worked too hard for this. It's her legacy."

But he planned to return in time to hear his Sonny and Cher memories presented in a very different light: As part of Saturday's "Bravo Mr. Batt!" Jazz Journey concert at Dixon Hall on the Tulane University campus. Featuring the Louisiana Philharmonic Orchestra and a bevy of jazz musicians, the show salutes Battiste's music and career.

New Orleans music lovers ready to 'Bach Around the Clock'

For his new album 'New Orleans Meets Harlem, Vol. 1' (March 31 / J-Master Records), jazzman Marcus Roberts imagines a musical migration. In his eloquent liner notes, he writes, "We made this recording to show how New Orleans music impacted the music of the later Harlem style and how both impacted all of modern jazz, including our own trio's group sound." The compositions come from the desks of Jelly Roll Morton, Fats Waller, Scott Joplin, Duke Ellington, and Thelonious Monk - plus an original tune by Roberts.

Fast forward to this Saturday, when Art’s nephew Ivan Neville brings his own very Nevilles-related band Dumpstaphunk to Revolution Hall (425 River St., Troy). In the New Orleans music magazine Offbeat, Ivan explained his band’s approach: “You gotta listen and know when not to play.” That’s some pretty intense listening.

The other four notable New Orleans funk masters in Dumpstaphunk can play enough notes for a dozen players, so they don’t leave much space for Ivan to play, or lots of opportunities for him to not play.

New Orleans: Food, folks and all that jazz

Music pours from each pore of this city in an insistent, incessant stream of diverse melodies and message

Sunday, March 29th, the Backbeat Foundation will usher in the fourth season of the Rhythmic Roots Community Music Project and Green Ability Fair. This unique cultural, musical, and education experience celebrates the rhythms of the Crescent City and brings together many of the community’s leading environmentally driven organizations. In addition to performances from some of the finest talent in the Big Easy – especially its percussionists – the Rhythmic Roots Fair stages to displays, demonstrations, and exhibits from its community partners. Musical guests who will be featured on March 29th include Seguenon Kone & Friends and Charles Joseph’s Backbeat Brass Band.

The Jazzfest Grids Are Up!

Eddie Bo, a potent, eclectic New Orleans pianist, singer, songwriter and producer who inspired a dance craze with his 1962 hit "Check Mr. Popeye" and later directed fans to "Check Your Bucket," died Wednesday, March 18, of a heart attack. He was 79.

"He was one of the last great New Orleans piano professors, kind of a bridge between Professor Longhair and Allen Toussaint," said New Orleans Jazz and Heritage Festival producer Quint Davis. "Everyone now has to remember to check their bucket on their own, without Eddie to tell us."

Born Edwin Bocage, he died March 18 of a heart attack at age 79. The prolific, eclectic Bo adroitly distilled an excitable synthesis of rock 'n roll, rhythm & blues, jazz and funk. He inspired a dance craze with his 1962 hit "Check Mr. Popeye" and later directed fans to "Check Your Bucket."

New Orleans Jazz and Heritage Festival producer Quint Davis described him as "one of the last great New Orleans piano professors, kind of a bridge between Professor Longhair and Allen Toussaint."

The memorial service for Eddie Bo’s family, friends and fans will be held at the Rock ‘N’ Bowl on Wednesday April 1 from 2 p.m. to 5 p.m. Performers (right now) include Allen Toussaint, Joe Krown and Marva Wright. Speakers include Nick Spitzer and Jan Ramsey.

Eddie Bo, an exuberant New Orleans pianist and singer who wrote for and worked with artists like Irma Thomas, Etta James and Art Neville of the Neville Brothers, and whose song “I’m Wise” became one of Little Richard’s biggest hits, as “Slippin’ and Slidin’,” died last Wednesday. He was 79 and lived in New Orleans. 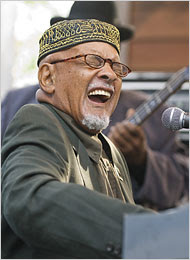 Mr. Bo, a rhythm-and-blues belter and florid barrelhouse pianist, came of age when New Orleans street music, based on marching band traditions, was being translated into a distinctive local rhythm and blues style. He flourished as a songwriter and performer, making the transition to funk in the early 1970s.

“He had a very percussive sound, more jazzy than Professor Longhair,” said John Broven, the author of “Rhythm and Blues in New Orleans.” “He was always at the forefront of trends, right back to the Little Richard days and into the funk era, when he released some really revolutionary records.” 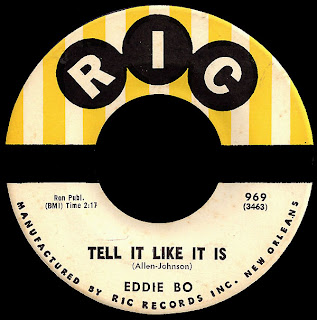 Born Edwin Bocage, Bo was one of New Orleans' most prolific musicians, with over 50 singles to his credit and a vast number of productions as well. HIs career spanned over 50 years and it's hard to imagine a more stalwart and influential musical figure out of NOLA than Bo - he's certainly up there with the Neville Brothers, Dr. John, Fats Domino, etc. (The UK's Soul Generation has a great, visual discography of all the different labels Bo recorded for, many of them of his own creation such as Big 9, Bo-Sound and Scram.)

For my generation of Bo fans, we got into his style and sound thanks to the incredible funk sides he produced in the 1960s through early 1970s. Bo shared - in the most general sense - similarities with the sparse funk style of Allen Toussaint and the Meters since both made heavy use of the famed NOLA second line backbeat syncopation and polyrhythm. However, while the Meters' best-known songs have a density and gravity all their own, Bo's approach was more kinetic and lively - I always associate a subtle swing to this rhythms and especially thanks to constant collaborator James Black on drums, Bo always knew how to engineer a killer drumbreak to keep the crowd's feet in motion. 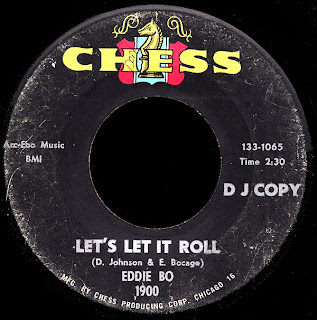 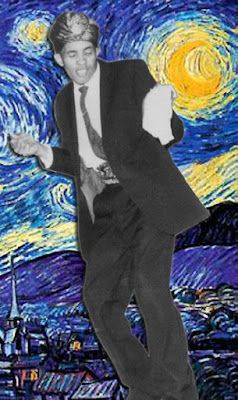 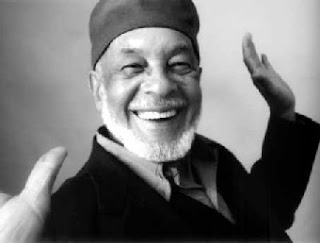 Bocage released more than 50 singles in his career - a number second only to Fats Domino among New Orleans artists - including "Check Mr. Popeye" in 1962.

"That was probably his biggest hit," said friend and musician Gregory Davis, 52, a trumpet player for the Dirty Dozen Brass Band. "That song kept him working for a long time."

‘Check Your Bucket’ was Bo’s 1970 follow up to 1969s ‘Hook and Sling’ which was a Top 10 R&B hit. The record is not only fine and dandy on a purely musical level, but is a great example of post-hit momentum, and how the charts don’t always tell the whole story.


As dynamic as ‘Hook and Sling’ was – understandably a hit – when the sweet funky strains of ‘Check Your Bucket’ first make contact with your ears, you can’t help but wonder why this particular record didn’t take Bo even further into the public consciousness.

NOTE: This mix, featuring the wide range of work Eddie Bo did with other artists (as writer, producer, arranger and often all of the above) was originally featured here in May of 2008. It’s not complete but it does give a pretty good overview of this side of Eddie’s career.

As the week goes on I plan on featuring a few more individual tracks, as well as a new “odds and sods” mix featuring some of Eddies earlier work and a couple of tunes by others that didn’t make it into this mix.

I’ve never gotten the story of how Bo became involved in ‘Pass the Hatchet’, but here’s a quick synopsis of what I do know…

The band playing on ‘Pass the Hatchet’, that actually composed the song was a group called Earl Stanley and the Stereos. Written by Earl Stanley (Oropeza), Roger Leon and Ray Theriot, ‘Pass the Hatchet’ was a super heavy bit of garage-hurtling-toward-funk that would have been enough – as an instrumental – to get any room up and dancing.

However…
At some point a certain journeyman musician by the name of Eddie Bo stepped in and was recruited (possibly by Seven B label owner Joe Banashak) to add vocals to the track, taking a great tune, and making into something else entirely. Adding Eddie Bo to the mix created a chemical reaction rendering an already volatile substance positively explosive.

From This Day On... an Eddie Bo tribute mix
compiled by Second Line Social 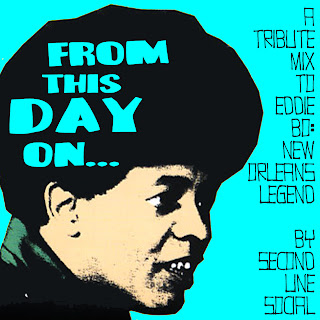