...the hoarse musician can barely hear my response above the din at BJ's, the downtown New Orleans bar where he's drinking at 4 p.m. on a Monday afternoon. He and his bandmates in the Morning 40 Federation emerged from the storied Ninth Ward almost a decade ago, and have since made a cottage industry out of daytime boozing: Their moniker refers to the habit of downing a 40-ounce beer at dawn, and all their slovenly horn-rock songs are about getting effed up, New Orleans–style. As in: thoroughly. As in: The last time they hit town, Scully puked on his monitor mid-set at Mercury Lounge.

The Democratic National Convention will step out to a decidedly Big Easy beat.

The 6,000 delegates expected to attend the Aug. 24 welcoming party at the Colorado Convention Center in Denver will groove to the Voice of the Wetlands All-stars featuring guitarist Tab Benoit, Cyril Neville, Irma Thomas and Marva Wright, plus three of the four original Meters, the Soul Rebels Brass Band and the Wild Tchoupitoulas Mardi Gras Indians.

Later that night, the same musicians are to perform during a private after-party at Denver's Fillmore Auditorium hosted by Friends of New Orleans, a non-profit, non-partisan Washington D.C. organization that advocates on behalf of New Orleans, and coastal restoration.

The Voice of the Wetlands All-stars are also performing Sept. 1 at a Friends of New Orleans, party during the Republican National Convention in Minneapolis. Former Congressman Billy Tauzin and actor and FONO board member John Larroquette will host both the Denver and Minneapolis events, which New Orleans, community radio station WWOZ (90.7 FM) plans to broadcast live.

Additionally, Porter, guitarist Leo Nocentelli and drummer Zigaboo Modeliste of the Meters are expected to perform with Walter "Wolfman" Washington and other special guests.

We were told not to miss Henry Butler, he of the psychotic, off-the-hook right hand. He was playing in the New Orleans tent, which was dark, dust-free and nearly people-free, which provided a respite to what was going on just outside. Mr. Butler is one of the most celebrated pianists in a town – New Orleans — that has its share. He can do anything and often does, opening with a riff on Debussy or at least what sounded like one, and then vamping his way into “Let It Roll.” His hands did very different things and then came together and did precisely the same thing, with sparks nearly coming out when his paws collided. I watched a kid next to me spaz out during one of his more remarkable riffs, clicked my tongue in judgment and then found myself doing something similar five minutes later. The guy can go.

"On my to-do list for the first night was a visit to the new Somethin‚ Else stage, a venue dedicated to showcasing traditional New Orleans music, with the inaugural performance by the Soul Rebels brass band. The entry fee was a mandatory $5 donation, with proceeds going to charities that help out New Orleans musicians; for that small fee, less than a bottle of beer at the festival, you can enjoy music in an air-conditioned environment (and as far as I'm concerned, the only difference between Heaven and Bonnaroo is that Heaven has better air conditioning)."

WWOZ's The View From Bonnaroo

The Bonnaroo folks did an amazing job on the Somethin' Else tent, with the appearance of a real New Orleans club. Let's say that if Tipitina's and the Maple Leaf had a baby, this is what it would look like. Of course, it didn't hurt that it was also air conditioned! I spent most of the weekend in there and truly felt like I never left New Orleans!

Q: What role do you see music playing in the recovery of New Orleans? A: There's no doubt that music has played a major role in the process of recovery in our beloved, beleaguered city. Music is a quintessential part of the fabric in the life and culture of New Orleans, and vice versa. Musicians were among the first to return to the bewildering mess that was New Orleans following the storm, and though there were very few places for them to play, and very few people to hear them, they provided an early signal that the precious spirit of New Orleans was not dead. The music has continued to play a strong part in buoying the spirits of the citizenry, and most of the venues have reopened. New ones have sprung up to replace those that were lost.

When Dr. John's Gris-Gris hit the rock underground in 1968, it wasn't certain whether its master of ceremonies had landed from outer space, or just been dredged out of hibernation from the Louisiana swamps. The blend of druggy deep blues, incantational background vocals, exotic mandolin and banjo trills, ritualistic percussion, interjections of free jazz, and Dr. John's own seductive-yet-menacing growl was like a psychedelic voodoo ceremony invading your living room. You could be forgiven for suspecting it of having been surreptitiously recorded in some afterhours den of black magic, the perpetuators of this misdeed risking life-threatening curses for having exposed these secret soundtracks to the public at large.

Finally, a band we can all agree on. They make fairly straightforward, country-informed rock music featuring plainspoken vocals, guitar-based instrumentation and regular time signatures, which, theoretically, should place the band squarely in the crosshairs of Quint Davis and Co.

Theresa Andersson Burns up the YouTubes 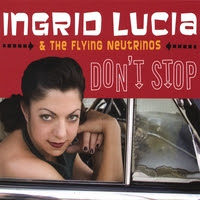 Ever been staggering drunk through the streets of New Orleans and you couldn't find your friends because...

Ingrid Lucia & The Flying Neutrinos sounds in their 2007 album Don't Stop are the perfect, truly authentic accompaniment to a raucous evening in The Big Easy.

Sean Penn told us that he had bio-diesel busses waiting at the festival to drive anyone who wanted to come with him to New Orleans and that we'd be volunteering and meeting various groups and listening to speakers on the way. He promised to feed us and pay for our camping and told us that we would work hard but have fun.

"Volunteerism is the ultimate party and on that note I'm going to say something I have not said in 28 years, 'Hey buds, let's party!'"

I turned to Aim and shrugged my shoulders, "Why not?" She replied, "Let's go!" Just like that our decision was made. We had accepted the ultimate dare, and we were going to New Orleans with Sean Penn!

an interview with Art Neville

I asked him about the Saints, who were coming off the best football season in the franchise’s history. Did he see any of the games? “I saw all of ‘em — on TV,” he said. “I had the best seat in the house.” I told him I am a Jets fan. “Broadway Joe — that’s my boy,” he said. “He’s a bad motherfucka.”

"There just seem to be something about New Orleans music that makes the dreariest of occasions seem like a carnival."

NolaRev's Stuff They Say on 'OZ

"Like other die-hard New Orleanians, I listen to WWOZ religiously... But it's not just the music. It's the patter, the conversations, the outrageous opinions, so freely expressed by 'OZ's dedicated staff of volunteer DJs. Sometimes, the listener wants to shout, "Yeah, you right!" (and maybe some listeners do) to express complete agreement; sometimes the listeners just have to shake their heads and smile wryly, hardly able to believe that anyone could or would get away with such shenanigans; and sometimes you just gotta laugh and say, "Only in New Orleans!"

Dr. John and Our Critic Embark on a Chile-Pepper Eating Contest:
Our man Sietsema and the Night Tripper duke it out at Brooklyn Sichuan

Though I was sweating bullets, Dr. John remained composed throughout, regaling us with tales of long-gone friends, including Sam Cooke and Marvin Gaye, then relating his bayou recipe for wild-duck-and-goose gumbo.

CSC: What do you guys do on gameday?

JG: If we are touring, we watch the game wherever possible and if we are driving we listen loudly on Sirius satellite radio. Its wonderful to hear Jim Henderson’s voice while driving through Colorado. If we’re home and not going to the game, I’ll grill some chicken wings and get down to some serious watching. If I’m at the game, I’d like to apologize to the women and children sitting near me.

JM: We're usually on the road, spreading the New Orleans funk around the country. We've got NFL ticket on Sirius radio so we never miss the game. Just suit up baby!!!!

Of all the recent recordings from musicians born-and-raised in New Orleans--and there are several notable ones--the one I've focused on lately is Dr. Michael White's Blue Crescent (Basin Street Records). It's an important marker in one man's spiritual and musical rebirth since Katrina.

HAVE YOU EVER COME UPON A BAND OF MARDI GRAS INDIANS IN THE STREETS OF NEW ORLEANS?

The musicians of New Orleans have given us all so much over the years. The vast majority of them worry more about creating great music than about getting rich. In consequence, they've been particularly devastated by the storms and levee failures of 2005, the debacle of the federal response of 2006, and the ongoing misery all New Orleanians face. The hundreds of nightly gigs that kept everyone alive have gone away, and many of them have lost their instruments as well as their homes.

In Pictures: Bonnaroo pt. 5 - NolaFunkyHorns sit-in with the Lee Boys

Soul Rebels rocking the Which Stage

Henry Butler holds it down

Check out the official Bonnaroo pics of Henry HERE.

Trombone Shorty gets the crowd fired up

Tambourine Lady shakes her stuff in a guest spot