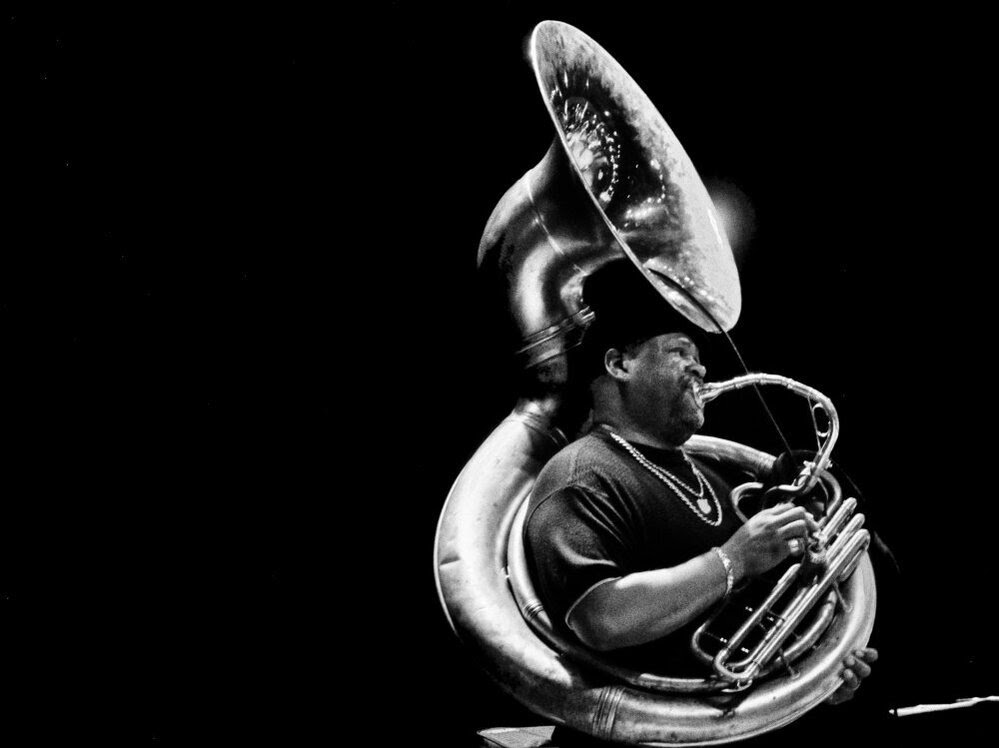 The New Orleans Jazz and Heritage Festival begins Friday, and music fans from all over the world will flock to the city's racetrack for seven days of music. A lot of things make New Orleans a one-of-a-kind music town, but one is the tuba, the monstrous brass instrument worn like a python squeezing its victim. When jazz began there after WWI, the tuba supplied the rhythmic bottom. As the music spread to Chicago, New York and beyond, the tuba spread with it, but was soon replaced by the more precise double bass. The hard-to-control (but easy to parade with) tuba soon disappeared from jazz almost everywhere, but not in the music's birthplace.

In New Orleans, even today, having a tuba in the band remains standard operating procedure. It's used not only in the city's countless parades (any excuse will do), not only in the trad-jazz outfits that still flourish there, not only in the new-wave brass bands that mix funk and hip-hop into the old carnival parade music, but also in rock bands such as Bonerama and the Anders Osborne Band and in contemporary jazz bands led by John Ellis and Kermit Ruffins.

Most tuba players in New Orleans play the sousaphone, a kind of tuba designed by John Philip Sousa himself to be easier to carry, with a wider bore for warmer sound and a forward-facing bell for better projection. Music sounds different when it's anchored by a sousaphone rather than an acoustic or electric bass. Because it's a wind instrument rather than a string instrument, the tuba gives New Orleans music a bottom that bubbles rather than twangs. Here are five examples of how the tuba makes its mark on the city's music.

After the heyday of traditional New Orleans jazz had passed, tuba music was kept alive in New Orleans by Allan Jaffe — who led the aptly named Preservation Hall Jazz Band — by Walter Payton (father of modern jazz star Nicholas) and by Tuba Fats. Anthony "Tuba Fats" Lacen (1950-2004) played with many of the city's top parade ensembles (the Young Tuxedo, Treme, Olympia and Chosen Few Brass Bands) and he showed the way to the tuba's embrace of funkier, bluesier music. You can hear that in this 1985 version of Professor Longhair's carnival standard, "Mardi Gras in New Orleans."

It's hard to overestimate the impact of the Dirty Dozen Brass Band on New Orleans music. When a group of young and unknown horn players and marching drummers started playing weekly gigs in the late '70s at Daryl's and the Glass House, they expanded the brass-band repertoire beyond the old warhorses to include everything from James Brown to Thelonious Monk, as well as vigorous originals. They played with a muscular funk that was largely propelled by Kirk Joseph's sousaphone. The band convinced a generation that brass-band music was cool and inspired the Rebirth Brass Band, the Soul Rebels Brass Band, the New Birth Brass Band and dozens more. But none of the younger groups had the jazz chops that the Dozen had, as you can hear in this 1985 medley of Monk's "Blue Monk" and T-Bone Walker's "Stormy Monday." The Dirty Dozen Brass Band plays the Jazzfest on May 1.

The most prominent of the Dirty Dozen's heirs was the Rebirth Brass Band, co-founded in 1982 by three teenagers: trumpeter (and future Treme star) Kermit Ruffins, bass drummer Keith Frazier and tuba player Philip Frazier. They were too young to have sophisticated jazz chops or tastes; they were out to create a distinctive form of New Orleans dance music. They did just that, thanks in large part to the rolling bass lines that rumbled and tumbled out of Frazier's tuba. They summed up their philosophy in this 1989 recording, "Feel Like Funkin' It Up." The Rebirth Brass Band plays the Jazzfest on May 8.

Bonerama gets its name from the fact that four-sevenths of the band are trombonists. But the band's bottom is held down by sousaphonist Matt Perrine, whose ability to play eighth notes and triplets on his unwieldy instrument is showcased here in his 2007 composition, "Bayou Betty." Unlike most of the city's brass bands, Bonerama emphasizes rock 'n' roll over jazz and R&B, giving songs by Led Zeppelin, Jimi Hendrix and The Beatles an unexpected Mardi Gras flavor. Bonerama plays the Jazzfest on May 6.

Kirk Joseph, the Dirty Dozen's original tuba player, later played for years with Anders Osborne, the Swedish-born blues singer who settled in New Orleans at age 19 and became one of the city's musical fixtures. With the zeal of a convert, Osborne adopted the local habits, including the use of the tuba to give his blues a percolating feel that one would never hear in nearby Mississippi, much less Sweden. You can hear how he and Joseph feed off each other in this 2001 Osborne original, "Stoned, Drunk and Naked." Osborne plays the Jazzfest on May 1.