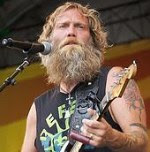 Swedish-native Anders Osborne first set foot in New Orleans in 1985, and almost instantly, the city compelled the young, wayward drifter to change his course. After landing a spot opening for Earl King at Tipitina’s, the songwriter/guitarist knew he had found his place. For Osborne, the freedom of playing in the moment transcended the stage and revealed to him a side of life that he had long since sought. In the years that followed, through high times and hard times — from shedding at Checkpoint Charlie’s in the late-80s to all but bottoming out in the wake of Hurricane Katrina — Osborne has come to find in the sentiment a wellspring of strength, solace, inspiration and inner peace. With an new EP just out, a long-player in the works and rigorous touring schedule on the horizon, the relentless roots rock workhorse rarely has a second to himself… but he isn’t reeling; he’s right at home. In this week’s episode of OffBeat’s Look-Ka Py Py Podcast, he takes us inside. Listen up…
No comments:

CEG & Nolafunk will host The Meter Men, which features three of the four original members of the legendary funk band from New Orleans The Meters (George Porter Jr., Leo Nocentelli, and Zigaboo Modeliste) with Page McConnell of Phish this Friday March 22 at The Grand Ballroom at Manhattan Center. The show will also feature Chicago’s The Main Squeeze, a rising funk band that is gaining national prominence, plus DJ Cochon de Lait in between sets.Tickets are still available through Ticketweb.com and (800) 745-3000.
A contest has been announced to MEET THE METER MEN! Participants should share the provided image as a status tagging CEG Presents and NOLAFUNK and share with their friends "I'm seeing The Meter Men this Friday and I want to meet the band because…" CEG & Nolafunk will select 4 lucky winners to MEET THE METER MEN AND PAGE MCCONNELL! Participants must purchase a ticket, advance or day of show, in order to win the prize. Winners will be notified via Facebook with instructions for the meet and greet. Contest link is http://on.fb.me/148iJwV.

It's no stretch to say that The Meters singlehandedly defined New Orleans funk. Performing and recording their own music throughout the latter half of the '60s and into the '70s, this seminal group laid the foundation for what is now a ubiquitous genre, influencing countless funk musicians with their earthy, down-home style. Tracks like "Cissy Strut," "Look-Ka Py Py," "Sophisticated Sissy," and "Chicken Strut" are staples of the funk genre, and the band's work backing artists like Dr. John, Robert Palmer, Lee Dorsey, and even Paul McCartney is instantly recognizable. The Meters' sound also provided a jumping off point for much of the hip-hop of the '80s and '90s, with rap luminaries like LL Cool J, Big Daddy Kane, Run DMC, Ice Cube, Public Enemy, A Tribe Called Quest, and more sampling the band's tracks.

Enter for your chance to win tickets to the 2013 New Orleans Jazz & Heritage Festival presented by Shell!


Visit www.nojazzfest.com for the daily lineup and more information.


*Please note, this contest does not offer airfare or accommodations. Only tickets to the New Orleans Jazz Fest will be provided to the winner. Winner must provide their own airfare, transportation or lodging as needed.
No comments:

"A circus-like barrage of sound serving as entrance music for a magical mystery tour of whiskey-soaked French Quarter back alleys," – Rory Callais, Offbeat

"A rangy dreadlocked Jesus-esque cat in a black suit sported a massive Sousaphone as he laid down the bass lines… One fellow moved from arch-top guitar to accordion to trumpet as the set progressed… Brazen vocals, slippery sweet drumming and a horn attack like we've never seen… Please come back boys," – Craig Havighurst, Nashville Music City Roots

Since forming in early 2009, the Dirty Bourbon River Show has released 5 studio albums and played over 400 live shows, fast earning them a solid reputation for their tight, diverse sound and high-energy performances. They can be found bringing their blend of "New Orleans Gypsy Brass Circus Rock" all over the USA, performing at festivals and respected venues year-round.

Their fifth studio album, Volume Three, continues to push the boundaries of modern-day music, pairing reflective, syncopated lyrics with complex, harmony-rich songwriting. As a full-time touring quintet of highly versed multi-instrumentalists, the Dirty Bourbon River Show strives to change the way we think and feel about music.
No comments:

What began as a chance encounter has become the next breakout band from the music capital of New Orleans. Neither lead singer David Shaw nor guitarist Zack Feinberg realized that life was going to be different when they randomly met in 2007. Two weeks after moving to New Orleans from Ohio, David Shaw was on his Birch Street porch with an acoustic guitar, strumming an original song called "Purple Heart." A passing bicyclist stopped to listen. He turned out to be Zack Feinberg, a guitarist in search of a band. Shaw and Feinberg struck up a conversation, a friendship and, eventually, The Revivalists. Four years later, the Revivalists look and sound like a band on the brink. In 2011 they were named Best Emerging Artist at Gambit Magazine's Big Easy Awards, which in 2012 has nominated them as Best Rock Band.

The Revivalists have been touring since 2008 and thriving on the national level, clocking in over 400 shows while sharing the stage and the road with such notable acts like Galactic, Trombone Shorty, The Rebirth Brass Band, The Radiators, JJ Grey & Mofro, and Alabama Shakes. Additionally, they have established themselves as an engaging festival act, winning over audiences at Voodoo Fest in New Orleans, DeLuna Fest in Florida, B.O.M.B Fest in Connecticut, The Kennedy Center Millennium Stage series in Washington, DC and the legendary New Orleans Jazz and Heritage Festival. There, they caught the attention of Rolling Stone Senior Editor David Fricke, who wrote about their performance on rollingstone.com.

The Revivalists' 2008 self-titled debut E.P was an Editor's Pick for both the Jam Band and American Traditional Rock on CDBaby.com. The young band was privileged to record under the guidance of Grammy Award-winning engineer/producer Chris Finney, whose resumé ranges from Dr. John to R.E.M. Songs off the album have been featured on MTV, Paste Magazine's Music Sampler, and on American Airlines flights. Their first full-length Vital Signs quickly became the top-selling album on CDBaby in the American Rock category.

The band's next album, City of Sound, released in March
No comments:

Nearly a decade evolved from their debut at 2003's New Orleans Jazz & Heritage Festival, Dumpstaphunk offers fans an unforgettable live experience steeped in the "Big Easy" tradition of a good time. The all-star collective features Ivan Neville on keys, the unique double-bass attack of veterans Tony Hall and Nick Daniels, Ian Neville on guitar, and the monster addition of Nikki Glaspie on drums.

From annual performances at New Orleans' Jazz Fest -- "The colossal low end and filthy grooves they threw down from the Gentilly Stage must have set a Jazz Fest record for the baddest bass jams ever." (Bass Player, 2012) -- to an aggressive touring schedule with noteworthy appearances at Bonnaroo, Wakarusa, Hangout, All Good, High Sierra, VoodooExperience, Bear Creek, Gathering of the Vibes, Wanee and Jam Cruise to name a few, Dumpstaphunk continue to redefine their genre with a signature groove that dares listeners not to move.

Ivan reflects, “We always keep the spontaneity going, that’s something I love about this band. We can funk it out with the best of them, but we also like to showcase how all sorts of music can come together and push the boundaries of what funk music is.”

“We just hope to spread the good word through funk," said drummer Glaspie. "If we can create an escape, give people a reason to get down and forget their problems, then we're doing what we set out to."

For tour dates and an exclusive first listen of Dirty Word, visit www.dumpstaphunk.com.

"One of the hippest funk bands in the land.” -- Guitar Player
"Dumpstaphunk remains synonymous with New Orleans and anyone from NOLA would be proud to call this their official band.” -- JamBase

"Ivan's so good, I play with him." -- Keith Richards, The Rolling Stones
The London Souls

Praised by former Idolator editor-in-chief Maura Johnston as “amazingly tight… swampy rock music that should make any lazy rock radio programmer rethink the word ‘grunge’” and credited as “an absolute must-see” by The Tripwire, The London Souls’ unique reinterpretation of classic hard-hitting rock and roll formulae recalls elements of the past with an ever-present boundless energy, fit to cement their place in the future.

Tash and Chris have been nothing short of a best-kept-secret among New York City concertgoers since the band’s formation in 2008, building a fervent and dynamic fan base leveraged by their ever-substantiated reputation for consistently well-rehearsed and impassioned, explosive live performances. The band’s celebrated sound and spirit draws significant influence from the driving force of British rock pioneers Cream and Led Zeppelin, to billowing and bouncing funk and soul, to the layered harmonies and memorable hooks of The Beatles and The Hollies, to the contemporary psychedelia of My Morning Jacket among many more.
No comments:

From New Orleans
The Stooges Brass Band Live in NYC

The Stooges Brass Band has been one of the elite brass bands in New Orleans but only recently is receiving the accolades and well deserved recognition of their importance to the music scene of New Orleans. Since 1996, their high energy show on the stage and in the streets has engaged audiences with their innovative blend of traditional New Orleans brass sounds and contemporary hip-hop beats.
Stooges Brass Band has shared the stage with: Ozomatli, Black Star (Mos Def & Talib Kweli), Black Joe Lewis & the Honeybears, Grace Potter & the Nocturnals, Shemekia Copeland, Pedrito Martinez Group, Galactic, Brownout, Trombone Shorty & Orleans Ave, Big Sam's Funky Nation, Funky Meters, Jessica Simpson, and more.
Whether they are second-lining in the back streets of the Crescent City, or performing across the country, the Stooges Brass Band immerse crowds in a high-energy, cut loose vibe that's contemporary yet deeply rooted in the culturally rich musical legacy of city of New Orleans.

Aaron Neville has one of the most distinctive voices in American music, which he describes as a mixture: "When I'm singing it's a mixture of my innocence in the projects, my Mom and Dad. It's all the good and the bad, the laughs and the frowns that I went through and seen other people go through. Then you be trying to write it. Whatever's coming out, you try and make it all cool."

Web extra: Click HERE to watch artist James Michalopoulos as he reveals to Aaron Neville the painting he'd created of the singer for the 2013 New Orleans Jazz & Heritage Festival, and  to hear Aaron talk of when he discovered he had a voice.