As Mardi Gras approaches in earnest, fans of the Radiators are lamenting the loss of our soundtrack of the season. As a way of assuaging the angst, TVD is offering a free copy of the latest full-length download from the pen of Ed Volker. Read on for details on how to win.
No comments:

Joseph "Zigaboo" Modeliste is a master drummer, rhythm innovator, percussionist, and New Orleans legend. The most highly acclaimed drummer ever to hail from the Crescent City, Ziggy's creativity has been a wellspring of funk influence for three decades and has inspired numerous hip-hop tracks. His innovative work as a member of the internationally acclaimed R&B group The Meters, as well as his side work with artists like Keith Richards, Robert Palmer, and Dr. John, have garnered him an unparalleled level of respect among musicians and fans.

The original The Meters LPs were all recorded with Ziggy at the drums, and his work has been sampled many times over by artists like Musiq, Queen Latifah, Run DMC, NWA, Ice Cube, Salt-N-Pepa, Cypress Hill, EPMD, Public Enemy, A Tribe Called Quest, Beastie Boys, Naughty by Nature, and Tweet, just to name a few. Ziggy is also a BMI award winner for the Young Gunz track "Can't Stop Won't Stop," and his drum sound provided the main loops for Amerie's "1Thing," which was nominated for two Grammy Awards and was No. 1 on the R&B charts. In addition, he has released numerous solo albums, including Zigaboo.com (2000), I'm on the Right Track (2004), and Funk Me Hard Live (2009).

Ziggy has written over 200 songs individually and collectively with The Meters. Displaying both his musical genius and original funk style, his songs have been featured on albums and in movies nationally and internationally. He is also currently featured in producer Mark Ronson's Re:Generation Music Project, where he performs the original song "A La Modeliste" with Erykah Badu, Mos Def, Trombone Shorty, and members of The Dap Kings. Zigaboo's latest release, New Life, dropped in 2011 and has garnered praise as an amazing slide of funk and proof that his fountain of rhythmic imagination shows no signs of running dry. 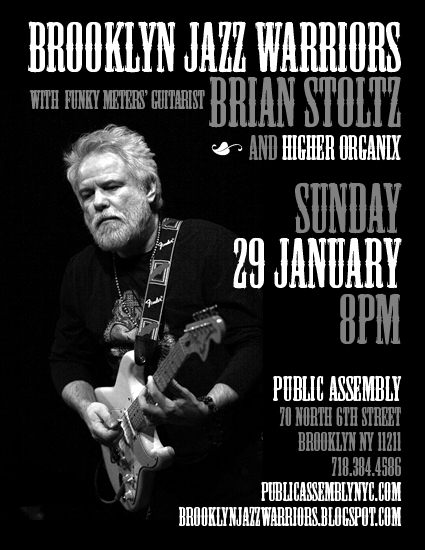 WWOZ presents the Johnny Sansone Band as part of the Smoke-Free Live Broadcast series from Ruby’s Roadhouse on the Northshore, sponsored by Let’s Be Totally Clear. Tune in and enjoy the music, and if you're in the neighborhood, come on out and breathe in some fresh air and sweet tunes!
No comments:

This Broadway star and musical chameleon has performed in punk bands and rock musicals, terrified audiences as Sondheim’s Sweeney Todd on Broadway and took home a Tony for his role in Sondheim’s Assassins, and currently plays the mysterious character “the observer” in the hit TV series Fringe. Here, he brings us An Idea of South, a genre-defying recital/cabaret/hootenanny of songs ranging from the Carter Family and Johnny Mercer to Vic Chesnutt and Samuel Barber with guest musicians from New Orleans. Hear Cerveris on our stage before he starts rehearsal for the role of Juan Perón in the new Broadway revival of Evita

Dr. John to Lead Three-Weekend Residency at BAM; Dan Auerbach to Join in Debut of Music from New Album, "Locked Down"

Dr. John—Mac Rebennack— will lead a three-weekend residency titled Dr. John: Insides Out at the Brooklyn Academy of Music in Brooklyn, New York, March 29 through April 14. The centerpiece of the residency is a three-night run of concerts in which Auerbach will join Dr. John and a handpicked band to premiere new music from the album at the BAM Howard Gilman Opera House, April 5–7. Dr. John: Insides Out begins the previous weekend, March 29–31, with a tribute to Louis Armstrong, and concludes April 12–15 with Funky But It’s Nu Awlins, a funk-infused night of New Orleans music, featuring key players from the Crescent City.

From March 28 to April 1, BAMcinématek presents a complementary series of films shot or set in the Crescent City. Spanning five decades, the series includes Belle of the Nineties (1934), The Flame of New Orleans (1941), and Down by Law (1986), plus many more.


Tickets for Dr. John: Insides Out go on sale next Monday, January 23, for Friends of BAM, and the following Monday, January 30, for the general public. To order then, go to bam.org.

For more on Locked Down, the forthcoming Nonesuch release from Dr. John, click here.