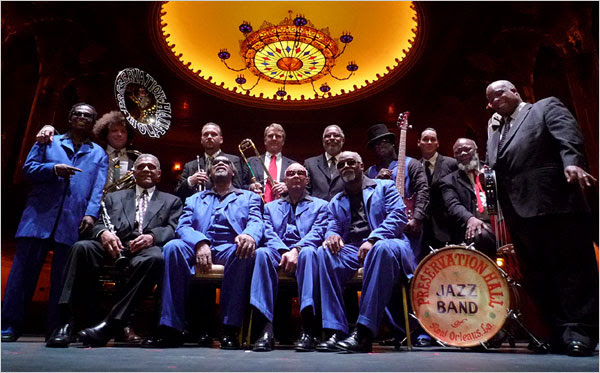 THE Preservation Hall Jazz Band, which in its 48 years has built a global reputation for presenting the traditional New Orleans sound, is taking a more contemporary approach these days — recruiting younger players, expanding its repertoire and allowing surrealist elements to creep into its performances.

But even as it modernizes its approach, the band, which comes to the Tarrytown Music Hall on Thursday, is keeping the old-time faith — hiring musicians whose strong links to the pioneers of jazz assure the music’s authenticity.

The combination makes for a multigenerational mix with appeal to a range of musical constituencies, not just aficionados of traditional jazz.

“Preservation Hall is not a museum piece,” said Benjamin Jaffe, 38, the band’s director and the son of its founder, Allan Jaffe. “We’re not recreating something that existed a hundred years ago.”

Most of the musicians that Allan Jaffe recruited in the 1960s and ’70s were part of the pioneering generation. But he died in 1987, and by the time his son took over the directorship, in 1993, younger players were filling the band’s ranks. The last founding member retired nearly a decade ago, and today’s players bring different kinds of experiences to the job.

Some of current crop — like Benjamin Jaffe, who plays tuba in the band and graduated from the Oberlin Conservatory of Music — have formal training that informs their thinking. Others — like the saxophonist and singer Clint Maedgen, 40, who honed his art in a variety show that has been likened to experimental theater — reveal a postmodern sensibility.

At the same time, players like the clarinetist and saxophonist Charlie Gabriel, 77, have experience in other idioms as well as traditional jazz. Mr. Gabriel, who at the improbable age of 11 started playing beside the early jazz greats along Bourbon Street, has also performed extensively with singers like Aretha Franklin and modern jazz artists like the pianist Barry Harris.

But what unites Preservation Hall’s members, present and past, is a powerful association with the cultural heritage of New Orleans, Mr. Jaffe said. Most of the musicians were born in the city and, wherever they may have traveled since, have strong roots there.

“What we’re doing is part of a continuum,” he said, “part of a tradition that is now in its fifth and sixth generation.”

Mr. Gabriel, who joined the Preservation Hall band two years ago, met the early greats through his father, the clarinetist and drummer Martin Manuel Gabriel, a third-generation New Orleans musician. Martin Gabriel found his precocious son a spot in a Works Progress Administration band, filling in for established players who were fighting overseas during World War II.

Long before he played with Ms. Franklin, Charlie Gabriel was sharing bandstands with early New Orleans masters like the trumpeter George Colar, the trombonist Jim Robinson and the clarinetist George Lewis — an apprenticeship he took so seriously, he said, that his playing retains many of the licks, tricks and mannerisms he picked up from those mentors.

“Each one of them had something to give you,” he said. “All you had to do was listen.”

Like Mr. Gabriel, Mr. Jaffe has taken up the family business. Beyond sharing an affinity for the tuba, which his father also played in the band, Mr. Jaffe has shown the kind of talent for promotion that his father, a one-time market researcher in New York, did when he converted a French Quarter art gallery that was presenting music part time into a full-time operation he called Preservation Hall.

Mr. Jaffe, who was raised just blocks from Preservation Hall, has barely altered the 18th-century building, which still lacks public bathrooms and air-conditioning. But he has introduced fresh musical fare, including rock ’n’ roll tunes like the Kinks’ “Complicated Life,” whose chord structure and lyrical message he deemed suitable. Mr. Maedgen first sang the piece with the band in the spring of 2006.

A visit to Preservation Hall in the spring of 1971 found the musicians, led by Thomas Valentine on trumpet and with Allan Jaffe on tuba, performing in a straightforward manner. In contrast, said Bjorn Olsson, the Tarrytown Music Hall’s executive director, the band’s most recent of nearly a dozen visits to the Music Hall have been boisterous affairs, with musicians standing on chairs and engaging in other theatrics.

What tack the eight-man touring band will take this time, when they will share the stage with the vocal group the Blind Boys of Alabama, will be based in part on reading of the audience, Mr. Jaffe said. He said the band’s members have been favoring tunes that animate concertgoers, like “Ice Cream,” a Tin Pan Alley shuffle with a familiar refrain (“I scream, you scream, we all scream. ...”).

Mr. Jaffe also said that the band has always ended its sets with “When the Saints Go Marching In.” And the sets usually begin with an upbeat number like “Bourbon Street Parade” or “I’ll Fly Away,” though the band took a more somber approach after Hurricane Katrina, opening with “Billie’s Blues,” named after Billie Pierce, the band’s first pianist.

Katrina, which destroyed band members’ homes and closed Preservation Hall for eight months, has given a new urgency to the band’s mission, Mr. Jaffe said. About 20 musicians — veterans and emerging artists alike — has collaborated with the band on an album of classic tunes to benefit Preservation Hall outreach programs. The album, to be released in February, and a full schedule of one-nighters have helped the band heal, Mr. Jaffe said.

“For us,” he said, “the touring and being back again is what’s most important — and also acknowledging and having people recognize that there is a reason behind what we do.”