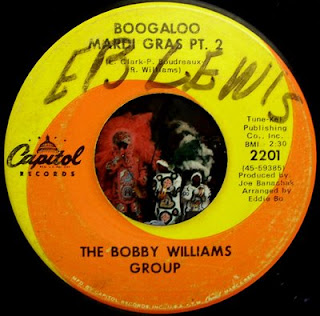 Twelfth Nigh has just passed last week. Carnival season is upon us. King cakes are in the stores. The parties have started. Costumes are being put together. The rolling krewes are making their final parade preps. And the Indians are practicing their music and moves in corner bars, and sewing feverishly to finish their new suits. As thoughts turn more and more to February 24, 2009, what better time to pull out my battered copy of a record that I think is a significant, but overlooked example of New Orleans' finest seasonal music, produced by a one-of-a-kind local wonder, Eddie Bo.

As a son of Treme and veteran of the Olympia, New Birth, Treme and Lil Rascals brass bands, trombonist Glen David Andrews has a long history with second-line jazz. But on his new "Walking Through Heaven's Gate" CD, he hews closely to a program of straight-up traditional gospel.

"When I'm singing for God," Andrews said this week, "that's the only thing that's better than a second-line.

"This is a personal record. This is like doing my first record all over. It's got hints of jazz and funk, but overall it's a church record."

So initially, I planned to start the new year off with a weekend full of Walter “Wolfman” Washington. I began by catching him with the Roadmasters on Friday, January 2nd and my plan was to catch him again on Sunday, January 4th with Joe Krown and Russell Batiste for their weekly gig at the Maple Leaf. But what I didn’t realize was that both Walter and Russell had left for the Jam Cruise, and wouldn’t be in attendance. Luckily, Krown brought along his own trio, which consists of guitarist Brint Anderson and drummer Mike Barras. Upon walking into the Maple Leaf, I notice Camile Baudoin (guitar) of the Radiators and “Mean” Willie Green (drums) of the Neville Brothers. Needless to say, I knew that I was in for something special.

There’s no dearth of two-step and zydeco rhythm on “Alligator Purse” (Yep Roc), an upbeat new release by BeauSoleil, the pacesetting Cajun-revivalist band. The album, overseen by the television producer Michael Pillot, features songs by Bob Dylan, J. J. Cale and Julie Miller, as well as originals and traditional Louisiana fare. The mix isn’t out of character for Michael Doucet, the band’s sprightly fiddler and lead vocalist: he may be an old soul, but he’s also a muddler. He and his partners have such a clear identity by now — Mr. Doucet started BeauSoleil in 1975 — that the material bends toward them rather than the other way around. No wonder the album’s assorted guests, including Natalie Merchant (vocals), John Sebastian (harmonica) and Roswell Rudd (trombone), seem comfortable but mindful. They know they’re only passing through.

Stomping At The Ponderosa

You won’t see Ben, Hoss or Little Joe there, but Wanda Jackson heads the list of performers for the eighth annual Ponderosa Stomp at New Orleans’ House of Blues April 28-29.

Jackson, a newly-minted member of the Rock and Roll Hall of Fame Class of 2009, will be joined by notable roots and blues stars (and a few who defy category) including Carl Mann, Dale Hawkins, James Burton, Otis Clay, ? & The Mysterians, The Legendary Stardust Cowboy, The Bo-Keys, Robert Parker, Ray Sharpe, Long John Hunter, Texas Johnny Brown, Little Joe Washington, Little Willie Littlefield, Deke Dickerson & the Ecco-Fonics and Roy Loney and Cyril Jordan of the Flamin’ Groovies backed by The A-Bones and Lazy Lester.

Construction is scheduled to commence in August, with the grand opening slated for spring 2010.

This week marks the centennial of Danny Barker’s birthday. Born on January 13, 1909, this torch bearer of New Orleans music was a jazz banjoist, guitarist, singer, songwriter, and ukelele player.

Banjoist, guitarist and raconteur Danny Barker's epic career spanned tap dancing in the Storyville district as a child; a stint in New York contributing to hundreds of recordings by the likes of Louis Armstrong, Cab Calloway, Charlie Parker and Lena Horne; and the creation of the Fairview Baptist Church Band, which helped revive the New Orleans brass band tradition. He also released memorable recordings of his own and with wife Blue Lu Barker.

IT’S HARD TO BELIEVE, but 50 years ago, the future of Cajun music seemed hopeless. The reason it flourishes today is due in part to the efforts of the innovative traditionalist Dewey Balfa (1927–1992), a fiddler who made it his mission to revive the beloved music of his childhood.

Born in 1927 into a French-speaking family of sharecroppers in southwest Louisiana, in a small town near Mamou, Balfa and his brothers—Will, Harry, Rodney, and Burkeman—learned traditional French fiddling from their father Charles. Although his family was proud of its heritage, many in southwest Louisiana were embarrassed by the stereotype of the ignorant, boorish Cajun who could barely speak English, and it was forbidden to speak French in the local schools at the time.

So when Balfa was invited to perform at the Newport Folk Festival in 1964, his neighbors warned him that he would be ridiculed by the college-educated Northern audience. Instead, Balfa and his fellow Cajuns received a standing ovation from an audience of 17,000 newfound fans. 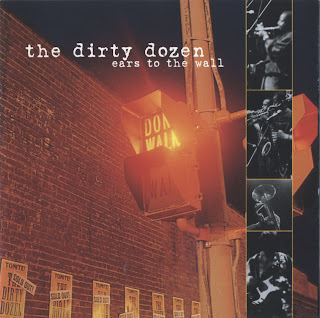 It's amazing what you can find in the 99 rack in some record stores. On this release, the Dirty Dozen drops "Brass Band" from their name and adds a keyboardist and a trap set drummer, instead of the New Orleans brass band style separate bass drummer and snare drummer. Traditionalists may bitch and moan about the band's changes; nevertheless, Ears To the Wall sho' nuff be some fonky stuff. It's neat to hear the tuba (technically, it's a sousaphone) play the bass parts along with the trap set drummer. This mostly instrumental old-school-meets-new-school release should be satisfying to anyone who is looking for something a little different.